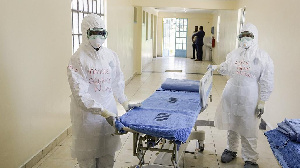 The coronavirus was confirmed in the Chinese city of Wuhan in late December 2019. Cases have since been confirmed in over scores of countries across the globe.

The World Health Organisation, WHO, has since declared it a pandemic. WHO chief Tedros Ghebereyesus said whiles China had a robust health system to detect and control, his outfit remained concerned about the virus entering country’s with weak systems.

With about 30 African countries currently with recorded cases, governments continue to roll out increasingly robust measures to halt the spread and to contain the pandemic which has claimed a number of lives.

In this article, we will share the latest developments as authorities implement measures to contain the spread of the virus, especially on the African continent. There is a flurry of restrictions across Africa as governments take measures to deal with the outbreak.

On Tuesday morning, Nigeria reported its third case in Lagos of a Nigerian lady who last travelled to the United Kingdom.

Kenya also reported a news case bringing its tally to four. The latest case was confirmed today at the National Influenza Centre Laboratory. The patient is reported to have travelled from London, United Kingdom on 8th March, 2020 arriving in the country on 9th March, 2020, a statement read.

In Ethiopia, Health Minister Lia Tadesse, said a new positive case involved a British diplomat who had entered Ethiopia from Dubai. She was self-isolating when the case was brought to the attention of the authorities. She is the sixth case for the country. Contact tracing is underway.

President Uhuru Kenyatta has also slated Saturday March 21, 2020 as a “Day of Prayer” as the country turns to God to seek his intercession in the midst of the pandemic.

The president stressed that Kenya has historically used prayer to seek divine intervention during hard times. The session will however take place at the State House and the media are to carry it live on their platforms to allow all Kenyans to participate.

The statement from State House read in part: “… we also turn to God to share our fears, our apprehensions, but also to seek his guidance and ever-present protection.

“With this in mind and after consulting a cross-section of ordinary Kenyans as well as our religious leaders, I have decided to declare this coming Saturday, 21st March 2020, as a National Day for Prayer.

“In consideration of the protocols that we announced on Sunday and other ongoing protocols that will be announced from time to time, I have thought it necessary that this day of prayer be observed in our homes, in our places of work or wherever we shall be residing on that day.

“This prayer day will be led by a team of religious leaders here at State House, Nairobi starting at 12.00 noon on Saturday.”

A number of African governments are announcing restrictions aimed at preventing the rise in coronavirus cases in their territories. From the closure of borders and the suspension of flights to banning of public gatherings and even in the case of Sudan declaring a state of emergency.

We pool together the major restrictions and measures by different governments:

Sudan: The Sovereign Council in Sudan has declared a state of emergency to help control the coronavirus pandemic. The country has only a case which has resulted in the death of the patient in question.

The council “decided to close all airports, land and sea border crossings, except to humanitarian aid,” spokesman Mohammad al-Fakki Suleiman told journalists. State news agency Suna quoted a military spokesman as saying that cadets and trainees would be given leave as a precaution.

Tunisia: The North African country announced it will be closing its land borders and airspace to all commercial activities from Wednesday, in a bid to protect the country from the spread of coronavirus.

Health officials say the number of confirmed cases has risen to 24. The latest announcement by Prime Minister Elyes Fakhfakh comes three days after a 16:00 curfew was announced for restaurants, cafes and bars.

All commercial flights are to be cancelled, but arranged evacuation flights will be permitted. Trade and cargo will not be affected by these measures.

Ivory Coast: The country via an announcement by President Alassane Ouattara on Monday evening announced a temporary ban on foreign visitors especially those from countries hard-hit by the coronavirus pandemic.

The ban only applies to countries that have more than 100 confirmed cases, the authorities said in a statement on Monday. This includes the US, France, the UK and most of Europe.

For the next 15 days, only Ivorian nationals and permanent residents of the country will be permitted to enter from abroad following a mandatory two-week quarantine on arrival.

The security council headed by President Alassane Ouattara also ordered the closure of all schools and universities from Tuesday for a period of 30 days.

Chad: Despite being virus-free, Chad on Monday announced suspension of all flights effective midnight of March 19, 2020 in an official government statement.

Botswana and Zambia who are also virus-free have announced a series of measures similar to what most African countries have in place.

All schools, colleges and universities in Zambia to close indefinitely this Friday in response to the pandemic. The announcement has been made by the country’s minister of health, Dr Chitalu Chilufya. Zambia yet to report a confirmed case.

Zambia missions abroad have been directed to review visa applications for would-be travelers to Zambia. Foreign travel to high risk countries should be be postponed.

Buses from outside Zambia will not dock at the usual station—the InterCity—but at a dry port. This is to ensure a thorough screening of passengers. Isolation centers have been identified in different parts of the country.

Bars and churches will have restricted hours of operation. The southern African country has so far investigated 28 alerts but results have been negative.

Rwanda and Burkina Faso have recorded increase in their tallies. Rwanda confirmed two new cases of coronavirus bringing the total number to seven.

The country’s ministry of health says of the two, one is a Rwandan woman whose husband had earlier tested positive. The other patient is a German who arrived in Rwanda from Germany on 13 March, then developed a cough and went to the hospital on 15 March.

Authorities in Burkina Faso also said five new cases had been recorded putting the overall tally at fifteen according to the WHO’s coronavirus tracking site.