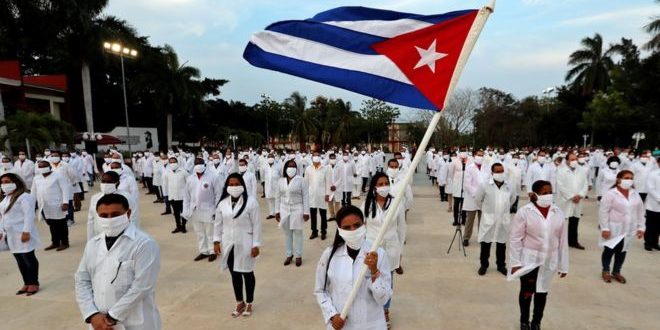 More than 200 doctors from Cuba are due to arrive in South Africa to help fight coronavirus.

The medics left on a plane that first carried a donation of South African medical supplies to the Caribbean island, its embassy in Pretoria said.

They are among 1,200 healthcare workers sent to battle Covid-19 in 22 countries that have requested help from the communist state.

More than 1.5 million people will be allowed to return to work, some schools will reopen, deliveries of hot food will be permitted and cigarettes will be back on sale.

But the sale of alcohol and public gatherings will still be banned.

The country, which at one point was following the UK’s infection curve, has stunned observers in the way it has slowed the spread of the virus, says the BBC’s Andrew Harding from Johannesburg.

It has recorded 4,361 cases of coronavirus, including 86 deaths.

The Cuban doctors – arriving in Johannesburg late on Sunday night – are to be deployed to different provinces by South Africa’s Department of Health, Cuba’s ambassador Rodolfo Benítez Verson has said.

The two countries have close ties as Cuba was instrumental in the fight against white-minority rule in South Africa, which did not end until 1994 when anti-apartheid leader Nelson Mandela was elected president.

Cuba is well known for its medical diplomacy, though it has not been without controversy.

The US government under President Donald Trump has urged countries not to accept Cuban medical missions, accusing the country of exploiting its medics – allegations Havana denies.

Cuba, with 1,337 recorded cases of Covid-19 and 51 deaths, has the world’s highest ratio of doctors to population and began preparing for the virus early.

According to the Reuters news agency, it is renowned for its focus on prevention and community-orientated primary health care to fight epidemics.

In South Africa, thousands of community health workers have been screening millions of people for coronavirus.

Professor Salim Abdool Karimwe, who is leading South Africa’s scientific response to outbreak, says they have been targeting “the most socially vulnerable communities, where this likely was most likely to spread”.

President Cyril Ramaphosa has warned of overconfidence as lockdown measures ease, saying infections are likely to reach their peak in August.

Meanwhile, it is reported that the country is seeking international funding to help fund a 500bn rand ($26bn; £21bn) rescue package to cushion coronavirus’s economic impact.

The government is to give new welfare grants to help South Africa’s poorest families, as millions of people have lost their incomes, and aid organisations warn of growing signs of desperation.