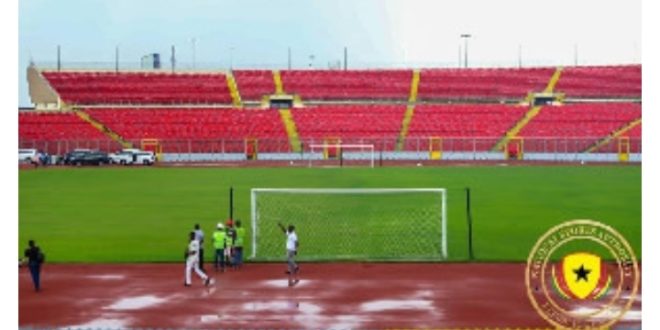 NSA assure of readiness of pitch for Ghana-Nigeria game

The first leg of the 2022 World Cup play-off between the Black Stars of Ghana and the Super Eagles of Nigeria will be played at the Baba Yara Sports Stadium, GhanaWeb understands.

GhanaWeb sources indicate that the team from the Confederations of Africa Football that inspected the stadium on Sunday and Tuesday, March 15, 2022 on behalf of FIFA have okayed the stadium to host the match.

The decision follows the rejection of the Cape Coast Stadium by FIFA following a protest by the Nigeria Football Federation.

The Nigerians had request that the game moved to a neutral ground with Benin being their preferred choice.

It comes as a relief to the FA and officials of the team as they would have massive support behind them in Kumasi.

Whiles the choice of venue has been settled, the squad for the game is a matter of public discourse with the FA showing no indication to publish the list of players invited for the squad.

According to Henry Asante Twum of the Ghana Football Association, the decision to hold on to the release of the squad is a ‘strategic’ one made by the technical team of the Black Stars.

“It is a technical decision backed by management, and it is a well-thought-out and purely strategic move.”

“They felt it’s a way of controlling or minimising the abuse that normally takes place before games, especially on social media. Sometimes, the public abuse gets to the players and affects their mentality,” he told the Ghanaian Times in interview.

Henry Asante Twum urged the public to remain calm as the association together with the technical handlers are in total control of the situation.

“I know the players and their clubs have been informed and the coaches are in talks with the individual players as we speak. Coaches can choose not to go public at all and it’s within their right to do so,” he added.