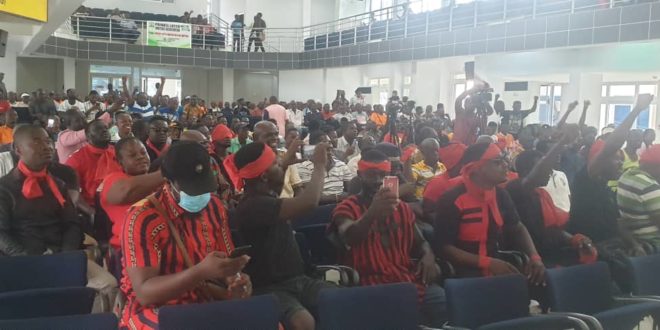 The Concerned Lotto Agents Association Ghana (CLAAG) have called on the Sammi Awuku-led National Lottery Authority Management to rescind their decision to reduce the percentage of Lotto writers from 30 to 20 per cent.

According to the Executive Secretary of the Association Mr Kweku Duah-Tawiah, the situation resulted in several incidences of near altercations between the Lotto Writers and their respective agents.

“The situation has therefore resulted in several incidences of near alterations between Lotto writers and their respective agents. This coupled with numerous outpouring of angered Writers expressing themselves through voice calls, WhatsApp and SMS messages to our offices and Executive officers demanding for sustained nationwide demonstrations against the reduction of the percentage”.

A press conference held by the Ghana Lotto Operators Association(GLOA), Private Lotto Operators (PLO) and the Concerned Lotto Agents Association of Ghana (CLAAG) saw some of the Lotto Writers calling on their leaders not to accept the proposal by the National Lottery Authority.

Mr Emmanuel Ofori, A Lotto writer in an interview added that if their leaders fail to fight on their behalf they will demonstrate against the National Lottery Authority and Sammi Awuku.

According to him, a reduction in their commission under the current hardship of the economy is inappropriate.

“Things are very expensive these days, we want a 40% increment not decrement from the 30%. If you can not increase it then do not decrease it either. All that I want to say is that if our leaders fail to fight against the percentage will reduction we will organise a demonstration and embark on a nationwide strike until the National Lottery Authority and Sammi Awuku change their minds”.

He added that they were looking forward to seeing Sammi Awuku and the NLA call for an increment of their commission but not a reduction.

He, therefore, called on GLOA, CLAAG and the Private Lotto Operators (PLO) to seek amicable solutions to the pending problems at hand.

However, the Concerned Lotto Agents Association has noted that it will invite its members again on Friday 11th November 2022 to reconvene and decide on the next line of action.

Previous Afro Arab Group Chairman Joins McDan, Others To Celebrate Accra Girls At 62
Next NPP flagbearership: Honest and courageous of Ken Agyapong beats all other aspirants