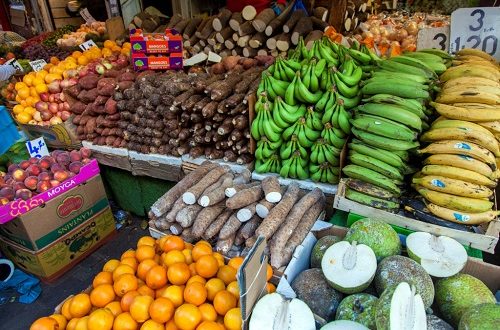 A pressure group, the Concerned Farmers Association of Ghana, has blamed the reported high prices of foodstuffs in markets across Ghana on price adjustments by middlemen.

Addressing a news conference in Accra on Monday, September 12, 2022, the Concerned Farmers could not simply understand why food prices were reportedly high on markets, especially within the major cities.

Spokesman for the Concerned Farmers Association, Nana Oboaadee Boateng Bonsu, nicknamed “Farmer General”, addressing the media, provided what he termed as the actual facts in the market.

Without reference to factors that telescope into the final prices of food, Mr. Bonsu pointed out with some examples that five tubers of yam and a huge bunch of plantain cost Ghc 10 at rural farm gates.

As such, he was virtually shocked about the cut throat prices when farm produce ends up on urban markets, lamenting how just a tuber of yam could cost Ghc 10 or even more in the cities.

Analyzing the matter, the Concerned Farmers Association of Ghana stated emphatically that the sudden sharp increase in prices are adjustments by middlemen.

The Farmers accused the middlemen of reaping supernormal profits to the detriment of consumers.

The Farmers held the press conference after the media had for weeks blamed the unprecedented inflation affecting food and other consumables on recent astronomical increases in fuel prices, blamed on extraneous factors by government. On the issue of middlemen and traders also in business to make profits, the Concerned Farmers described their recent tendency on the incidence of “profiteering”.

Meanwhile, Mr. Bonsu announced that government will by the end of 2022, introduce truck system where trucks go to farm gates in hinterlands to directly cart farm produce to marketing centres. This might not eliminate go-betweens completely but it will help stem artificial inflation in the food sector, he said.