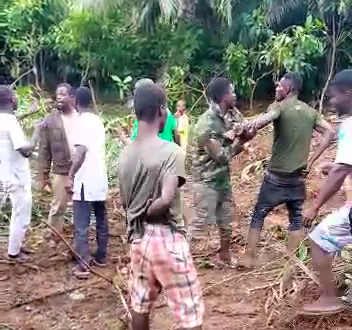 Residents of Sabronom in the Ahafo Ano South East District of the Ashanti says   the community is on the brink of collapse due to the invasion and destruction lands by some  illegal miners, popularly known as ‘galamseyers’

According to them, the galamseyers have taken over the government school in the community destroying the facility’s lands all in the name of searching for gold.

In an interview with the Kumasi based OTEC 102.9 FM’s afternoon political show “Dwabrem”, on Monday October 10, 2022, an opinion leader from the Community Peter Shai said the galamseyers have also trespassed on the building of True faith church with galamsey equipment’s.

“These facilities we are talking about are in the middle of the community but these illegal miners are bent on destroying them. All our attempts to stop them in the last few weeks have been proven futile as the police in the area have refused to act on our reports”. He said.

“Another landmark which has been affected by the unscrupulous activities of illegal mining activities in the community is the area serving as market, as we speak now, machines are here ravaging the area and i must say we are helpless”.

Mr Shai however disclosed that the illegal miners are being protected by some armed guards preventing youth in the community from stopping them.

He called on president Akuffo to as a matter of urgency act on this menace and save the community from extinction.

Previous Over 79,000 girls in Ghana aged 12 to 17 married or living with a man – GSS
Next C/R: Man washed away while defecating in the sea at Anomabo