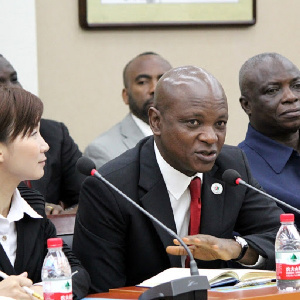 Correction: This story earlier suggested that the President of the National House of Chiefs, Togbe Afede XIV had blamed SEC for their poor handling of the clean-up process that led to the loss of many jobs. He did not state that, rather, he suggested SEC could have better performed its scrutiny role, to prevent the collapse of the affected financial institutions. The Central Bank however was blamed for poor management of the clean-up process. This change has been effected because it was a misreportage of what Togbe Afede XIV said.

President of the National House of Chiefs, Togbe Afede XIV has described the clean-up exercise of the banking sector by the government through the Bank of Ghana as ill-managed.

According to him, the Securities and Exchange Commission could have performed better, its scrutiny role, to prevent the collapse of the affected financial institutions. He also bemoaned the poor management of the process by the Central Bank.

“I’ve said it before that the process was not managed well. If you have crossed indebtedness among several institutions, you want to open their books and see where you can do set-offs in the first place. Otherwise, if I owe you GH¢10.00, you also owe someone GH¢9.00, who also owes someone GH¢8.00, if I fail to pay you, you are in trouble. If you fail to pay the other party, he is in trouble. So, if suddenly, all of us are collapsed, we all are gone,” as qouted by Citi Business News.

He added, “on the other hand, if we examine all our books, it will be realized that if Togbe pays you the GH¢10.00, everybody else is covered; then through set-offs, Togbe becomes the only person who goes, not all of us. I think there were a lot of mistakes in the way it was was handled. So, by the time probably they realized, it was too late to do it differently; so, they saw many companies that collapsed.”

Meanwhile, the Finance Minister, Ken Ofori-Atta has earlier said that most of the collapsed banks and financial institutions that became insolvent due to the financial sector clean-up exercise were found to be ‘ponzi’ schemes.

He explained that before the takeover of the collapsed banks by the Bank of Ghana, some managers and directors of the banks were literally bankrupt yet were taking depositors funds and loaning them back for regeneration.

As part of its efforts to restore confidence in the banking and specialized deposit-taking sectors, the Bank of Ghana (BoG) embarked on a clean-up exercise in August 2017 to resolve insolvent financial institutions whose continued existence posed risks to the interest of depositors.

The move by the central bank was a comprehensive assessment of the savings and loans and finance house sub-sectors carried out by the BoG in the last few years after it identified serious breaches.

Previous Day light robbers made away with over GH¢400,000 – Victims
Next Asantehene reiterates commitment to protect water bodies in Asante Kingdom