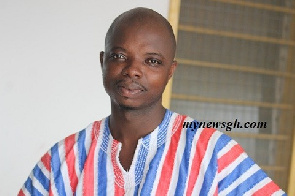 The Criminal Investigations Department (CID) has invited the Brong Ahafo First Vice Chairman of the NPP, Kwame Baffoe popularly known as Abronye DC over his claims that the former HIV Ambassador, Joyce Dzidzor Mensah has breached some provisions of the Criminal Code.

It would be recalled that, Abronye DC petitioned the CID to arrest Joyce Mensah for making a false declaration when she misrepresented herself as being an HIV patient so as to fall within the ambit, scope and retirement of the Ghana Aids Commission.

He said while she was the AIDs Ambassador, she benefited from a number of incentives from the commission which largely came from the State.

“One of such benefits was that the State provided her with a fully furnished apartment. It is interesting to note that, after her contract was officially terminated, Joyce Dzidzor Mensah was still in possession and occupied the apartment meant for the ‘AIDS ambassadors’ until August 2014 when the lease finally expired.”

He said Joyce Mensah continued to enjoy so many incentives as if she was still an ambassador for the commission which included travelling allowances.

“Per my intelligence gathered so far, there was a conspiracy between Joyce Mensah and certain members of the Aids Commission which enabled her to succeed in all these and in my candid opinion, this amounts to willfully causing financial loss to the state and in violation of the criminal code,” he said in the petition.

He believes “making such false declarations is in contravention and in violation of section 248 of the Criminal Code, 1960 (Act 29).”

Mr. Bronye’s petition comes days after a video of Ms Mensah soliciting for funds in Germany for the construction of a National Cathedral emerged.

Upon these allegations levelled against her and the CID has responded quickly and has invited Abronye DC for interrogations.

Speaking to Abronye DC, he confirmed the invitation and pledged to make himself available before the CID in Accra.