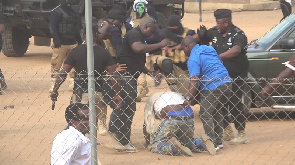 The Criminal Investigations Department (CID) of the Ghana Police Service as part of its probe into the Ayawaso West Wuogon by-election violence alongside the sittings of the Emile Short Commission of Inquiry, has interrogated two journalists of Citi FM and Citi TV who witnessed some of the violent scenes at La Bawaleshie during the election.

A letter signed by the Director General; Public Affairs of the Police Service, ACP David Eklu requested the media house to provide the police with “a copy of the evidential video footage (s) captured during the by-election” to aid its investigations.

A three-member team led by the station’s Head of TV; Richard Mensah, reported at the CID at 10:00am on Thursday, to give evidence of what the station reported on the election day.

“In fact, Citi FM is the first media house to honour our invitation. We appreciate your coming,” Supt. Joseph Afful Edwards of the Intelligence Unit at the CID headquarters told the team.

The station’s reporters on the Election Day, Eugenia Tenkorang and Hanson Agyemang, narrated the events of January 31 at the La Bawaleshie Polling centre as they unfolded.

The reporters were interrogated by a team of police officials from the national CID and the Legon police station, after which witness statements were taken from them.

The members of the CID team which carried out the interrogation included the Deputy Director General of the CID, ACP George Tweneboah, Supt. Joseph Afful Edwards and Supt. Kinglsey Aboagye, the Airport Divisional Crime Officer.

The rest were Detective Inspector Dzah Warlonyo, an investigator at the Legon Police, and DSP Agbenuvor Emmanuel of the Police Professional Standards Bureau.