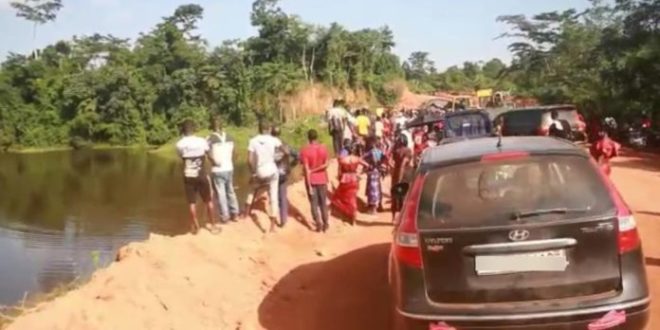 Chinese man missing after car plunges into dam at Kwahu

A Chinese national in Ghana is reportedly missing after his car plunged into a dam at Kwawu Esaase in the Kwawu West Municipality of the Eastern Region.

The unnamed victim works with the Akroma Gold Mining Company Ltd as a supervisor for the construction of road networks in the district.

It was in the course of this duty that he reportedly slid off the road and fell into the dam.

He was driving a company car with registration number GT 2680 – 13 at their mining site.

Speaking to Adom News’ Akwasi Dwamena, the general manager for the company, Godfred Somuah, confirmed that rescue team has made efforts to find the victim.

After three hours of search, the company car was retrieved, but the Chinese man was nowhere to be found.

The Manager believes he has been trapped under water.

Efforts are still underway to search for him.

Previous 2023 Guber: Eze accuses Wike, PDP of laying legal ambush on political parties ahead of main elections in Rivers
Next Berekum Presec SHS graduate with 7A’s now an auto sprayer due to lack of funding