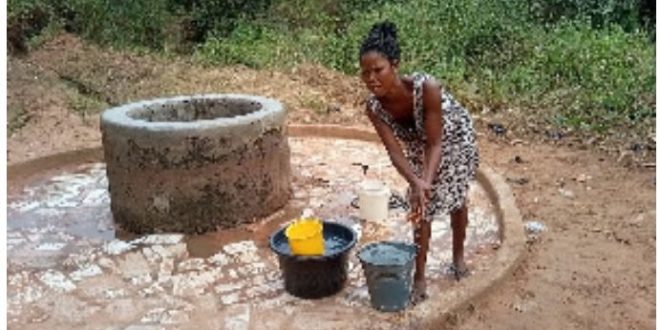 Residents of various communities in the Okper division in the Yilo Krobo Traditional Area of the Eastern Region have appealed to the Ghana Water Company Limited (GWCL) and the government of Ghana to help solve the water crisis in their communities.

They said they currently resort to well water for domestic purposes such as cooking and drinking with no pipe-borne water in the area.

The residents told GhanaWeb in an interview that they were aware of the health risks associated with drinking from the well but they had no option.

Several members of the affected communities mostly women, girls and children, according to residents were forced to converge at the site to struggle for water at the only well in the community.

The situation, according to residents, is particularly worse during the dry seasons when many come from far and near, including even students of the Mount Mary College of Education, to draw water from the only water source.

A resident, Madam Esther Ayongo said, “This is the only source of water we always use here…we always fetch this water. At times when its dry season, when you come here there’s no water unless you wait for some time before we’ll get water.”

She ended with an appeal to government to come to the assistance of the community.

Asafoatse of Okper-Manaam, Asafoatse Tetteh Amo Obledjimah IV, one of the affected communities expressed similar views. Underscoring the importance of water for the community, the traditional leader said the lack of the commodity continues to pose grave consequences and inconveniences to the people.

“The community here is not having the water services and it has become a very big challenge because people now enter people’s houses to fetch water and pay for the service and I’m pleading with the Ghana Water Company to come to our aid and provide us with water so that people will get some to satisfy their needs,” he appealed.

Deploring the situation, Divisional Chief of Okper, Nene Nanekey Terkpertey Ofori Agor IX who wondered why such basic needs could not be provided for the people said all the sub-divisions within his division are struggling with water challenges.

He said his visit to several communities showed many of his subjects wandering from one end of the community to the other in search of water.