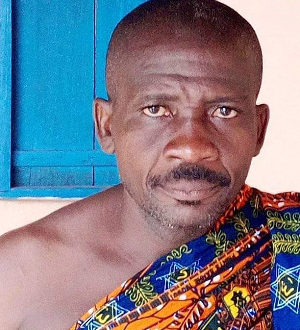 A traditional leader and chief of Suisi-Hiono in the Manya Krobo Traditional Area of the Eastern Region was on Monday, February 15 arrested by the Akuse Police after he allegedly tried to hire someone to kill Nene Olepeme Sakinor Nanor I, chief of Okuenya Adadlikuorsi, police sources say.

Asafoatse Kwabla Aglah, 50 who is the second accused in the case and his accomplice and first accused in the case, Simon Narhkorli, also 50, a security man who lives at Hwekper, a suburb of Odumase-Krobo, have been provisionally charged with preparation to commit a crime (murder).

The chief (Asafoatse Kwabla Aglah) and his accomplice were arrested after the alleged contract killer who is also the witness in the case (name withheld) reported to his would-be victim that the two suspects had contracted him to murder him.

According to information gathered by GhanaWeb, the ‘contract killer’ on Wednesday, January 27, 2021, approached a brother of the chief he was supposed to murder, Sipim Angmor Owuadjao who accompanied him to the chief the next day to inform him of the plot.

The contract killer disclosed to Nene Olepeme Sakinor Nanor I, who is now the complainant in the case that Asafoatse Kwabla Aglah and Simon Narhkorli on Tuesday, January 26, 2021, contracted him to kill him for a reward of Ghc20,000 and an acre of land if he succeeds.

To underscore their seriousness, the accused persons allegedly gave the contract killer an amount of GHc500 to purchase bullets for the operation.
Upon receipt of the information, Nene Olepeme Sakinor Nanor I, lodged an official complaint with the Akuse Police.

Investigations commenced into the matter and a Detective with the Ghana Police Service was engaged to liaise with the alleged contract killer and feigned interest in executing the deal.

In the course of investigations, the detective together with the alleged contract killer had encounters with the accused persons through face-to-face engagements and phone calls.

While Simon Narhkorli admitted in his investigation caution statement to planning with Asafoatse Kwabla Aglah to contract the witness to kill the complainant, the latter denied involvement in any such plot.

The first accused (Simon Narhkorli) on February 12 appeared before a Somanya District Court and was remanded into police custody to reappear on April 9, 2021, with the second accused (Asafoatse Kwabla Aglah) scheduled to appear before same court today, Wednesday, February 17, 2021.

A docket is also being prepared on the case to be forwarded to the Attorney-General’s office for advice.

Meanwhile, investigations conducted by GhanaWeb revealed that both suspects are engaged in a legal tussle with the complainant with the second accused recently losing a land litigation case to him and that with the first accused bordering on the destruction of property and theft which is also pending before the same court.

Commander of the Akuse Police Command, Chief Superintendent Winfred Asare Nyarko when contacted by GhanaWeb said further investigations were being conducted to get other suspects arrested.