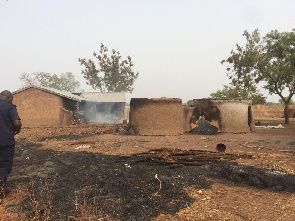 A combined team of police and military have arrested 12 persons and retrieved six single barrel guns at Nambiri a community in Chorkosi on Friday.

It was during one of the patrols that the team chanced on one person wielding a single barrel gun.

“The suspect took to his heels when he saw the patrol team but was chased down and arrested,” the police said in a statement.

“The team then decided to conduct searches in the community where the weapons were retrieved and their owners arrested to assist in investigations.”

Six of the suspects who had no exhibits were released on police enquiry bail, the police said.

Remaining suspects have been detained in Yendi.

Meanwhile, both the Konkomba and Chorkosi communities remain calm and peaceful as a result of the intensive police/military patrols coupled with extensive community engagements on the need to allow peace to reign.