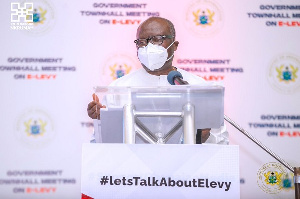 The government on Wednesday, February 2, held its second edition of the E-levy town hall meeting as part of stakeholder engagement to court support for the new tax measure introduced in the 2022 budget statement.

Government officials who spoke at the event ‘sang one chorus’ by urging Ghanaians to embrace the E-levy as a measure to help rake in revenue to address some of the country’s pressing needs such as roads and unemployment.

It was during the question and answer that generated a bit of an upheaval resulting in loud murmurings amongst participants at the event.

Western Region NDC Communication Officer, Richard Kirk-Mensah, wanted to know why the government was projecting the E-levy as the panacea to the country’s developmental problems “meanwhile your government over the past 5 years has in excess of over 400 billion but you cannot pinpoint how you have transformed the life of the youth”

He additionally proposed for the government to retrieve monies from misappropriated funds as captured in the Auditor General’s report.

“According to the Auditor General report for 2020, it states that the government has looked on for our monies over 12.8 have been embezzled. PIAC report also indicates that over 2 billion of our oil revenue are people’s pockets. if you add the two, it will be 14.8 billion. For me the government shouldn’t waste time to collect E-levy, we should plead with the religious leaders to pray for the Akufo-Addo government to retrieve at least half of the stolen monies,” he said.

Another participant who gave his name as Nana from Kwesi Mintim in a worried tone expressed concerns over “the profligate spending for the past 4 years” under the Akufo-Addo government while “the president is renting jet”.

The MC for the program Deputy information Minister, Fatima Aboubakar, interjected and asked him to be more specific with what he meant by profligate spending.

Continuing with his point, Mintim asked the government to cut down the number of ministerial appointees.

He had not finished making his submissions when the microphone was moved away from him sparking louder mutters.

Some people wanting to ask questions were seen upstanding while Kojo Oppong Nkrumah took charge and rallied for some quiet to be observed as the program continued.

Finance Minister, Ken Ofori-Atta mounting the podium in the midst of the noisy atmosphere addressed the questions raised in the first round of the question session.

Spirited arguments could be heard in the background whilst Ken Ofori-Atta continued with his responses.

Touching specifically on some of the accusations raised, Ken Ofori-Atta urged participants to exercise decorum in their language.

“The is no government which can say it has not done anything, we must speak with the real facts in hand and with respect. Ghanaians are not people who insult people so we must look at that. I met Kirk here, I have not insulted him and I have also not insulted your leaders so let’s be patient” he said.

The program continued orderly thereafter with some participants expressing support for the E-levy.

Previous 4 ‘sins’ under Mahama that have worsened under Akufo-Addo, Bawumia
Next A look at Despite’s 60th birthday cakes