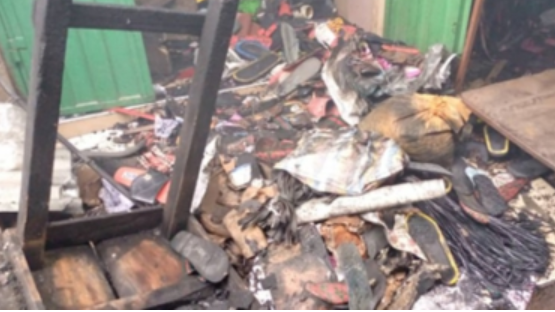 Traders whose shops were gutted at the leatherworks lane of the Kumasi Central Market are calling for government support.

Though the fire service is yet to value the extent of damage, some traders say they have lost tens of thousands of cedis to last night’s inferno.

The affected traders made the appeal in an interview with Ultimate News’ Ivan Heathcote – Fumador.

The debris and toxic smell from burnt sheds show the extent of damage of the fire at the Leatherworks section of the Central Market.

Affected traders could only wallow through the ruins to pick leftovers and douse embers left under the remnants.

The leatherworks lane of the Kumasi Central Market has suffered two major fires after the 2007 incident where stacks of materials and completed foot ware were razed down by fire.

The fire service had it tough controlling the fire because of the combustible chemicals used by the artisans in their work.

A trader who lost a whole shop described how difficult it was for the fire service to extend their water channels to the fire scenes because of the haphazardly arranged sheds and the narrow lanes running between them.

Another trader who lost 360 finished leather footwear to the fires blamed the trend on the poorly regulated electrical wiring in the market.

His concerns were obvious from the wiring crisscrossing each other into different shops with no regular pattern. (Visuals showing the poor wiring)

Deputy Ashanti Regional Fire Commander ACFO Henry Giwa expressed concern with the lack of access to various parts of the market; a trend that has contributed to fire spreading quickly during fire incidents in the market.

For now, the affected traders have begun clearing the debris to begin rebuilding their wooden stalls.

They are however pleading for some government support by way of loans to help them get back on their feet after suffering these losses.