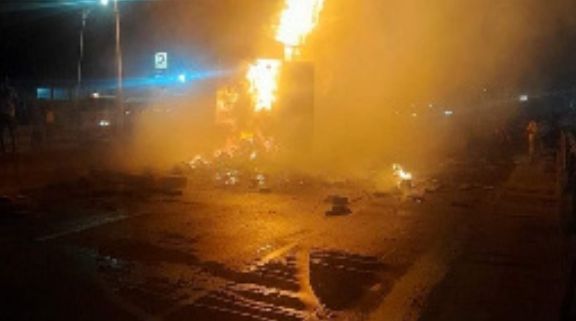 A cargo truck fully loaded with crates of eggs was on Thursday night (May 12) gutted by fire on the Accra-Nsawam road leading to heavy vehicular traffic on the stretch.

According to reports, security personnel available on-site moved in to prevent other vehicles from joining the gridlock.

The Ghana National Fire Service indicated in a statement that the incident occurred near the Ofankor barrier.

It however noted that its firefighters were on the grounds to douse the blazing fire as two fire tenders were deployed bringing the situation under control.

Meanwhile, the cause of the fire is unknown as the Fire Service is yet to provide an update on the situation.

No casualties were reported.

Read the earlier statement from the Fire Service:

A raging fire has gutted a cargo truck fully loaded with eggs on the main Accra – Nsawam road near Ofankor barrier.

Firefighters are busily battling the raging fire at the scene.

The unfortunate fire incident has resulted in heavy vehicular traffic on the main and outer roads leading to Nsawam.

Commuters and vehicles locked up on the affected stretch of the main and outer roads are implored to exercise patience as Firefighters work assiduously to bring the situation under control.