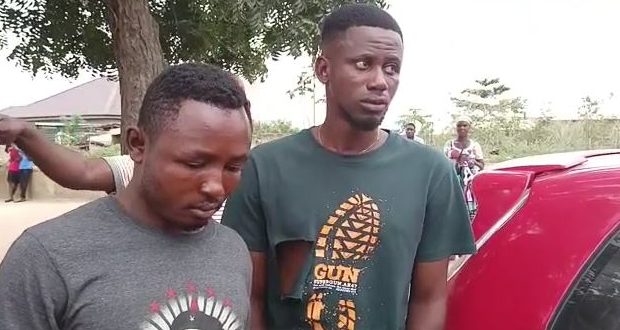 Two persons, Kwabena Paul and Kwabena Abeka are in the grips of the Awutu Bereku District Police Command for allegedly stealing a car part at Gomoa Mamfam after renting the car from Accra.

Information gathered indicates that Kwabena Abeka portrayed to be someone who had returned from the USA and rented a brand new Taxi from Accra to Gomoa Mamfam ostensibly to check on his land, not knowing he had connived with a mechanic to remove some parts on the car.

Upon reaching a section of the road, Kwabena Abekah informed the driver to park and escort him to his building under construction, and immediately after they left the scene, the mechanic moved to where the car was parked and removed a part of the car called ”silencer” which cost about Ghc3000.

However, luck eluded them and they were confronted and arrested by members of the ‘Asafo’ (vigilante) group.

The suspects confirmed removing a part of the car and they were handed over to the police.

The police have commenced an investigation into the matter.

Previous Gunman arrested after storming funeral to shoot chief
Next C/R: Boy, 6, severely injured after being pushed off palanquin at Anyan Abaasa