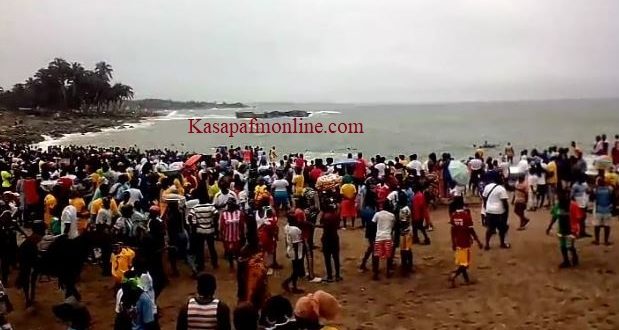 C/R: Man washed away while defecating in the sea at Anomabo

A man believed to be in his early twenties has been washed away by heavy tidal waves while defecating in the sea at Anomabo in the Mfantseman Municipality of the Central Region.

Information gathered by Kasapa FM News Yaw Boagyan revealed that the yet-to-be-identified man who was a stranger had gone to the community to celebrate the Festival and in the process decided to answer nature’s call.

He said to have gone to the sea and sat on the boulders in the sea defecating into the water body.

But while defecating, a heavy tidal wave suddenly hit the boulder he was defecating on and washed him away into the sea.

Further information gathered indicates that prior to his being washed away, all efforts by some residents to discourage the deceased from not going to the seashore to defecate proved futile.

He’s said to have claimed that he always feels comfortable when defecating into the sea because he feels coll breeze that circulates around him.

Speaking in an interview with Kasapa FM News Yaw Boagyan, the Chief Fisherman for the Anomabo Community Nana Kwame Sankah said this wasn’t the first time somebody has been washed away by the sea in the area.

He said what surprised them is how far he managed to go and sit on the boulder to defecate. He condemned the act of people defecating in the sea the shore he said such attitude must stop.

According to him, the community will perform libation into the sea to seek forgiveness to enable them to retrieve the body.

There’s currently a search on the sea to retrieve the body.

The case has been reported to the Anomabo Police Station for investigation.

Tags defecating in the sea at Anomabo man