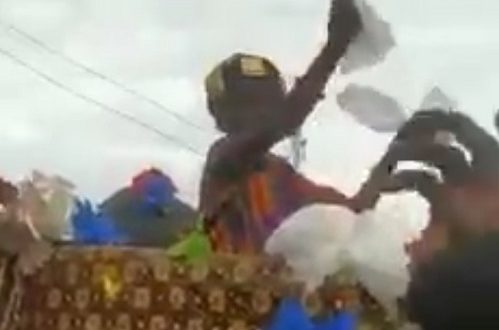 C/R: Boy, 6, severely injured after being pushed off palanquin at Anyan Abaasa

A six-year-old boy is battling for his life at the Ajumako Government Hospital in the Central Region after he was pushed to the ground from a palanquin during a Children’s Festival at Enyan Abaasa as part of the annual Akwambo Festival.

The incident happened Friday, September 9, 2022, when the Children numbering about 200 carried their Chief through the principal street of Enyan Abaasa.

Report gathered by EIB Network Central Regional Correspondent, Yaw Boagyan revealed that as part of their annual festival, the children this time around also decided to carry their Children’s Chief to make their festival unique to attract many people, especially the Children. So they made their palanquin using “Efiawura bag” and wood.

As the Children’s chief was being carried in the palanquin on processing with his retinue, a man who allegedly used to walk with the Paramount Chief of Enyan Abaasa, Osagyefo Kwamena Akonu X named Kweku Dadze from nowhere pushed the innocent little boy from the palanquin forcing him to crush on the tarred road and dislocating his shoulder and neck.

The suspect then took the palanquin away to the Chief’s Palace.

It is unclear what the suspect’s motive was for his reprehensible action.

The angry Children then carried their Chief on their shoulders but later the pains became worse so the parents of the victim quickly rushed him to the Enyan Abaasa Health Centre but were later referred to the Ajumako District Government Hospital.

The Victim is currently receiving treatment at the Hospital.

The case has been reported to the Enyan Abaasa Police Station and the suspect has been arrested.

Meanwhile, the Chairman of the Enyan Abaasa Youths Association, Kojo Ammisah has condemned the act by the suspect.

He is therefore calling for an apology from the Chiefs of Enyan Abaasa and the suspect else the Youth of the town will distance themselves from all activities that will be carried in the Enyan Abaasa Community.