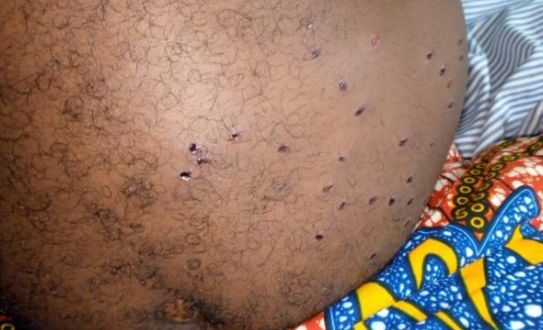 Share
A mobile banker with Breman Brakwa Rural Bank in the Region Central, Ebenezer Appiah Sam has been shot and robbed of undisclosed amount of money he collected from clients after armed robbers attacked him on the Breman Kokoso to Breman Amanfopong road.

On Thursday May 19, 2022 while riding his motorcycle and upon reaching the Breman Kokoso Cemetery, he heard  gunshots from the bush and was suddenly hit by four bullets.

The victim has escaped armed robbery attacks on the same road in the past.

In an interview with Kasapa News, Yaw Boagyan said the robbers stormed out of the cemetery with guns, Cutlasses, and other weapons threatening to shoot him dead if he refuses to give them the money.

He said, he struggled with the robbers but couldn’t save the money so they took it away.

According to the victim, after he sustained the gunshots he took his motorcycle and rode back to the Head Office at Breman Brakwa and he was rushed to the Breman Brakwa Hospital where he is receiving treatment now.

The case has been reported to the Breman Brakwa Police Station for investigation.

Meanwhile, the Chief Executive Officer of Breman Brakwa Rural Bank Mr. Felix Dompreh confirmed that the bank has been a target of armed robbery attacks but his outfit is doing everything possible to beef up security to control the situation.

He appealed to customers to calm down assuring that their money is in safe hands.

Previous C/R: Two mobile money fraudsters arrested at Kasoa, 2 others on the run
Next Ghana’s public debt hits ¢391bn as of first Quarter, 2022