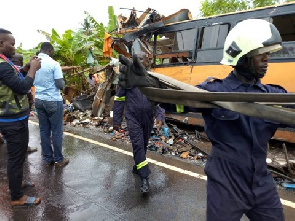 JUST IN: 8 confirmed dead, 70 injured in another Thursday accident at Ekumfi[PHOTOS]

Another accident at Ekumfi duakwa in the Ekumfi district of the Central region is reported to have claimed eight lives Thursday.

Over 70 others are also said to be in critical condition following the gory accident .

The accident involved a Yutong Bus from Takoradi to Accra and Metro Mass Transit Bus from Accra to Diaso colliding with a Cargo truck which was attempting to overtake running into a speed ramp.

The injured have been rushed to the Winneba trauma hospital, Apam Government Hospital and the Mankessim Catholic hospital

He admonished motorists to observe road safety rules in order to help reduce carnage on such roads.

The incident comes as the nation is still brooding over the death of over 50 people in an accident at Kintampo Thursday.