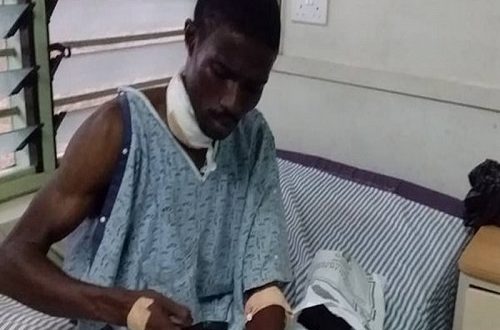 A businessman, who deals in Kako (dried salted fish), was allegedly kidnapped and assaulted by his four business partners at Kasoa in the Central Region.

The man, Solomon Adae, is currently on admission at the Winneba Trauma Hospital with wounds all over his body from hours of brutality by his kidnappers.

He told Adom News that the four gentlemen agreed to invest GHc43,000 into the Kako business but they gave him GHc28,000 in two installments.

He said he went to Senegal to buy the Kako and he waited for them to send the balance but they did not, so he bought the GHc28,000 worth of the product and left it for someone in Senegal to ship it to Ghana.

But the person in Senegal allegedly sold the Kako and bolted with the money.

The four got angry, called him a criminal, kidnapped him and brutalised him to the extent of breaking his leg, stabbing his neck with a broken bottle and threatening to tie him behind a car and dragging him on the floor till he dies.

Mr Adae mentioned three of his kidnappers’ names as Charles, Jeff and Frank saying that after threatening to kill him, they eventually drove him to the hospital themselves and bolted.