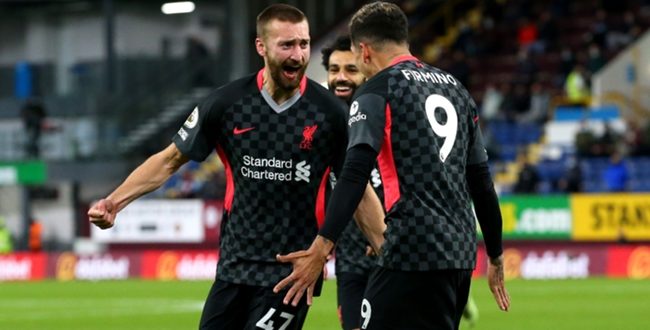 Liverpool’s late-season charge continued as they moved into the Premier League’s top four thanks to a 3-0 win away at Burnley.

The Reds claimed a fourth successive win to further boost their hopes of sealing Champions League qualification, Roberto Firmino and Nathaniel Phillips getting goals either side of halt-time at Turf Moor.

Jurgen Klopp’s side had needed a last-gasp winner from goalkeeper Alisson to beat West Brom on Sunday, but there was no need for any late drama this time, substitute Alex Oxlade-Chamberlain firing in a late third.

The hard-fought result sees them leapfrog Leicester City on goal difference and means a victory on the final day at Anfield on Sunday against Crystal Palace will see them in Europe’s premier club competition next season.

Liverpool had been wasteful in a first half that appeared set to end scoreless until Firmino popped up in the 43rd minute, providing the finishing touch to Andy Robertson’s cut-back cross.

The Brazilian was one of those to miss a clear opportunity as the visitors too often failed to trouble full debutant Will Norris in the Burnley goal. Sadio Mane and Mohamed Salah were also guilty of failing to hit the target, while Thiago Alcantara dragged wide.

Phillips had seemingly missed his chance to score a maiden goal for the club when blazing over before the break, but he made no mistake when getting his head on the end of Mane’s inviting cross seven minutes into the second half.

The defender used his head to good effect inside his own penalty area as Burnley pushed hard for a response, retreating onto the line to prevent James Tarkowski’s set-piece header going in.

Instead, it was Liverpool who grabbed the third goal of the game, Oxlade-Chamberlain thrashing in a left-footed drive just seven minutes after coming on as Norris was beaten at the near post.

What does it mean? Reds come on strong down the final stretch

A largely forgettable season could at least have a memorable finish if Liverpool can see off Palace, managed by former Reds boss Roy Hodgson of course.

A sixth win in seven trips to Burnley was far from straightforward, even if their opponents had not won at home since January 27. Chris Wood could not trouble Alisson when clean through at 0-0, while the home team had more on-target attempts (4-3).

Phillips steps out of the shadows to shine

A defender who was way down the pecking order for Klopp at the start of the campaign is playing a crucial role during the run-in. Phillips showed his value at both ends of the pitch, including becoming the 15th different player to score a Premier League goal for Liverpool this season.

With Harry Kane drawing a blank in Tottenham’s 2-1 home loss to Aston Villa, Salah had the chance to move clear of his rival for the Golden Boot. However, the Egyptian could not hit the target with any of his four attempts, including ballooning over when clean through in the opening half.

– Burnley are now without a win in their previous 10 Premier League games at Turf Moor (D5 L5), their longest winless run on home soil since between March and September 1984.
– Thanks to their victory, Liverpool end the day in the Premier League top four for the first time since mid-February, at the expense of Leicester, who find themselves outside the Champions League qualification places for the first time since early December.
– The Reds have lost any of their 14 Premier League matches when Firmino has scored the opening goal of the game (W12 D2), including winning each of the past 11 in a row.
– Including a spell at Stuttgart last season, Phillips’ header for was his first career goal, on what was his 20th appearance for Liverpool across all competitions.
– Since the start of last season, Burnley have lost all five of their Premier League games without Nick Pope in goal, conceding 3.4 goals per game on average, compared to just 1.2 in the 70 top-flight games in which he has started.
– Since the start of the 2017-18 season, only Kevin De Bruyne (49) has more Premier League assists than Robertson (35), who set up two goals in a game for the first time since April 2019.

Liverpool will hope Hodgson, who this week announced he is stepping back from top-flight management at the end of the season, does not spoil the party when Palace visit, while Burnley conclude their 2020-21 campaign with a trip to bottom club Sheffield