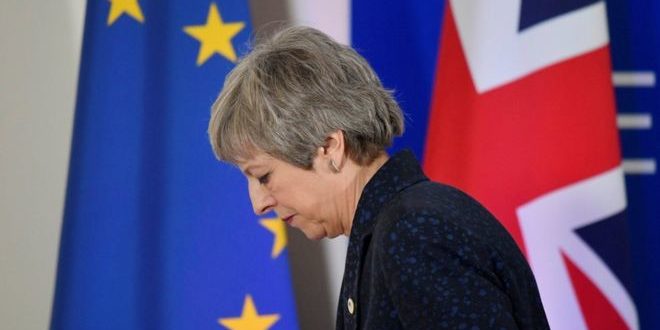 BREAKING NEWS: Theresa May resigns over Brexit: What happened?

Theresa May is stepping down as UK Prime Minister. She has announced she will resign as Conservative party leader on 7 June but stay in office until a successor is found.

Mrs May – who became the UK’s second female prime minister in July 2016 – had been under sustained pressure from lawmakers opposed to her Brexit plans.

Why did she go?

Mrs May had been struggling to get parliamentary support for the legislation needed to implement the deal she had agreed with the EU on how the UK would leave the bloc.

Her deal was rejected three times by Parliament. Efforts to find a compromise with the opposition Labour Party also failed.

On Tuesday, Mrs May made another attempt to convince members of parliament (MPs) to support her EU Withdrawal Agreement Bill – by offering a vote on whether to hold a second referendum, if the bill was passed.

The offer was designed to attract support from Labour MPs – but enraged many Brexit-supporting Conservatives.

Members of her cabinet began openly opposing the bill, while party members called for her to resign.

On Wednesday, one of her senior ministers, Andrea Leadsom, quit the cabinet, adding to the pressure.

On 24 May, Mrs May officially announced her resignation as Conservative leader, saying: “It will always remain a matter of deep regret for me that I have not been able to deliver Brexit.”

“It is now clear to me that it is in the best interest of the UK for a new PM to lead that effort,” she said.

Wait – hadn’t she already promised to step down? And didn’t her MPs already try (and fail) to oust her?

Yes. The whole thing has been messy to say the least.

Back in December, Conservative MPs angry at her Brexit policy launched a vote of no confidence against Mrs May.

Mrs May won the vote, and party rules prevented her opponents from launching another no confidence vote for a year.

However, opposition to her leadership continued.

In late March, after her deal was overwhelmingly voted down twice in Parliament, Mrs May promised Conservative lawmakers she would quit if they supported her Brexit deal.

Unfortunately for her, that didn’t work either – and the deal was rejected for a third time.

It seems like her offer of a vote on a second referendum was the final straw for many MPs – and as previously loyal ministers began openly opposing her, Mrs May decided it was time to go.

A leadership contest will begin the week after Mrs May resigns.

Several prominent Tory politicians are expected to run – in fact, many started unofficially positioning themselves for the race weeks ago, giving prominent speeches on the future of the party, or arranging photo-ops in their kitchens.

What does this mean for Brexit?

We don’t know yet.

A lot could depend on who succeeds Mrs May.

If a strong Brexit supporter wins, they might be more likely to insist that the UK leave before the current 31 October deadline, or leave even if it cannot agree on a deal with the EU.

Others touted for the role supported Remain in the 2016 referendum – some are opposed to no-deal Brexit, and open to the UK being more closely tied to the EU after it leaves.

Whoever wins will face the same problem Mrs May did – the fact that there doesn’t seem to be a majority in Parliament for any single Brexit option.

In fact, MPs have already tried to “seize control” of the Brexit process by holding a series of non-binding votes about what the government should do – but all options, ranging from revoking Brexit to allowing a no-deal exit, were voted down.

What is clear is that there’ll be a further period of uncertainty – something many EU leaders are annoyed about.

European Commission President Jean-Claude Juncker has accused UK MPsof finding it “more important to replace the prime minister than to find an agreement among themselves”.

“I am getting up fed up because we are [just] waiting for the next extension,” he told CNN on Wednesday.