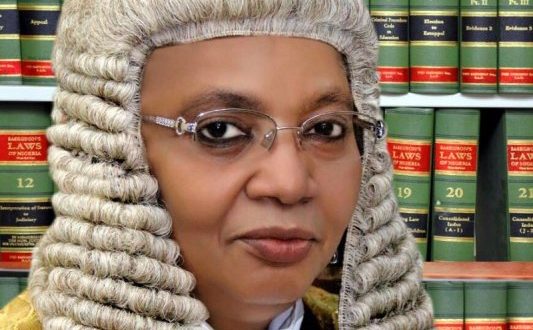 The President of the Court of Appeal, and Chairman of the five-member panel of the Presidential Election Tribunal, Justice Zainab Bulkachuwa, has recused herself from the tribunal.

On seeing Justice Bulkachuwa as the chairman of the five-man panel of the Presidential Election Petition Tribunal, Atiku Abubakar and his party, the Peoples Democratic Party (PDP) raised the alarm over her “connection” with the ruling APC.

The main opposition party and its Presidential candidate subsequently called on the tribunal judge to withdraw as the chairman of the five-man panel.

At the resumption of the Election Petition Tribunal sitting May 15, the tribunal asked the PDP and its candidate to formally file an application asking Justice Bulkachuwa to withdraw, which the party did on May 16.

At the resumption of sitting today, the tribunal dismissed the application by the Peoples Democratic Party (PDP), Nigeria’s main opposition party and its presidential candidat seeking to disqualify Justice Bulkachuwa from presiding over the five-man panel tribunal that is hearing petitions challenging the declaration that President Muhammadu Buhari won the February 23 presidential election.

The five-man panel in a unanimous ruling held that the said motion lacked any merit to warrant the tribunal to grant it.

However, Justice Bulkachuwa personally decided to recuse herself on the ground that the law has been properly stated.

This online news platform understands that Justice Bulkachuwa’s husband is a senator-elect of the All Progressives Congress (APC), Nigeria’s ruling party, a ground upon which the former Vice President and the PDP asked her to recuse herself.