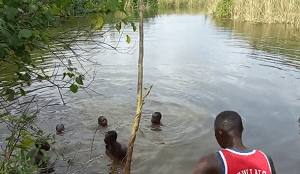 A 13-year-old boy has drowned in an abandoned illegal mining pit while trying to save his younger brother at Patriensa close to Konongo in the Ashanti region.

Residents say his death brings to four children who have drowned in the over 100 pits abandoned in the area in the past three years.

The deceased, Emmanuel Aboagye, died trying to save his nine-year-old brother, Yaw.

His father saved him early enough but lost the other brother.

The father together with the survivor told JoyNews what transpired at the site.

“My brother, Aboagye, and I came here to fetch water. I tripped and fell into the water, he jumped in to save him but I learned he drowned, said the nine-year-old boy, Yaw who was saved.

“He was not moving when I brought him out of the water. After rescuing him, I was told his senior brother, Aboagye was also in the water but I couldn’t save him because I am not a good swimmer. He was so weak when he was finally retrieved but I did have any hope he was alive though those around were saying he was still alive,” the father told JoyNews.

It took a number of local divers hours to rescue the boy who died later on his way to the hospital.

A member of the rescue team, Shadrach Ofori said the people expected more from the police at Patriensa.

But police at Patriensa say the people reported missing children but they told them to conduct a search for them and report to police later.

A number of children have fallen victim to them making the indigenes of the Patriensa worried.

Some residents who interacted with JoyNews called on the leader of the community and government to come to their aid by helping to cover up the ‘galamsey’ pits in the Region.

“If government would help us, we would be happy because the pits are killing children. These pits are everywhere, all around,” one resident said.