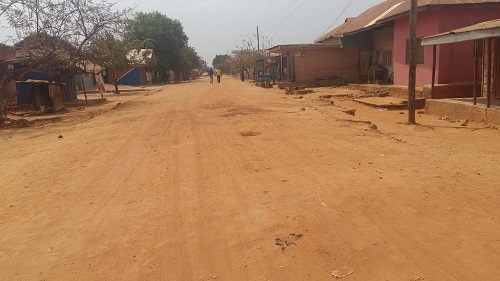 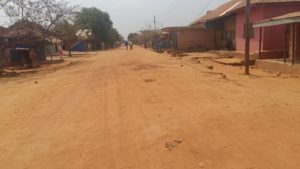 The Chief of Adwafo, near Kuntenase in the Bosomtwe district of the Ashanti region, Nana Osei Bannor, has expressed worry about the poor nature of the road linking them to Kuntenase.

He said the dust from the uncoated road is having negative health hazards like catarrh, cough and sore throats on his people.

He added that the road is also negatively impeding economic activities in the community as the residents have difficulties in transporting their farm produce to other communities for markets.

Expressing his worry to Otec News’ reporter Francis Appiah on Friday, January 28, 2022, Nana Bannor called on the government to tar the road to save the people from dying.

He also expressed worries over countless number of appeals made to the district assembly to address the situation but to avail.

“The dusty nature of the road is killing us here. A lot of my people are dying from catarrh, coughs and sore throats. As I talked to you, u could hear that I am suffering from catarrh. Nobody wears white clothes in the community, for the fear of being discolored by the dust,” he stated.

He further stated that the poor nature of the road makes commuters suffer a lot in getting vehicles to other communities either transferring their farm produce to sell or for other business activities.

“No commercial driver wants to come to Adwafo for the fear of breaking down his vehicle due to the road’s unmotorable nature. Sick people risk losing their lives over transportation problems so I am pleading with authorities to fix the road for us,” he pleaded.

Some of the residents speaking to Otec News admitted that the dusty nature of the road in the community is having a negative on them, both health and economic, and asked the government to deliver them from the bad situation.