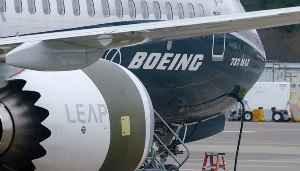 Boeing in talks to set up office in Ghana

American aircraft manufacturer, Boeing, is exploring the possibility of setting up a Maintenance, Repair and Overhaul (MRO) facility in Ghana to serve the West Africa sub-region.

Grounding of the plane maker’s 737 Max by airlines over safety concerns after two deadly accidents, canceled 737 Max orders, compensation to clients and the COVID-19 pandemic have conspired to erode the company’s fortunes.

The move by the plane maker, which had to accept government support in order to avoid more layoffs, is imperative to deepen its footprints in the Africa region.

Chief Executive Officer of the Ghana Investment Promotion Centre (GIPC), Yofi Grant, who confirmed the talks said: “We have had discussions of [Boeing] having an office in Ghana to service planes in the sub-region and also in Africa. Those discussions are ongoing.”

In West Africa, a number of airlines have Boeing planes in their fleet. Nigeria-based Air Peace and Arik Air, as well as Togo-based Asky Airlines, have significant numbers of Boeing equipment.

The desire to engage Boeing follows the success of getting world-renowned automobile brands to set up here in Ghana.

The companies include VW, Nissan, Toyota, and Sinotruck. VW has already begun production of five Volkswagen models—Tiguan, Amarok Pickup, Passat, Polo, and Teramont—at its Accra plant. Nissan and Toyota are expected to open their own plants this year.