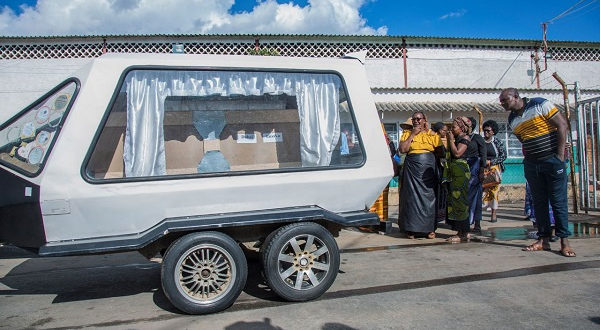 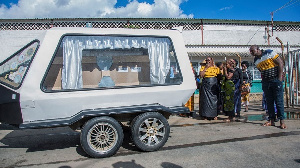 The body of Lemekani Nathan Nyirenda, a fighter recruited by the mercenary group Wagner for combat operations in Ukraine, was returned to Zambia on Sunday.

Nyirenda’s body arrived at Kenneth Kaunda International Airport in the capital Lusaka and was accompanied by Zambia’s Ambassador to Russia, Shadreck Luwita, its foreign ministry said.

The body was received by Nyirenda’s family and foreign ministry officials, the ministry stated in a series of tweets Sunday.

In agency pictures from the airport, a coffin can be seen in a white hearse with Cyrillic writing on the outside indicating the provenance of the casket.

A group of choral singers and grieving family members were at the airport to receive Nyirenda’s body.

He died in battle in Ukraine in September fighting for the Russian side.

His remains will be “transported directly to the University Hospital Mortuary” and then a series of post-mortem checks will be performed before the body is released to the family and burial will take place, Nyirenda’s family said Sunday.

Nyirenda, 23, was sponsored by the Zambian government to study nuclear engineering at the Moscow Engineering Physics Institute, according to the southern African country’s foreign ministry.

The ministry said the student was convicted in 2020 of unspecified crimes in Russia and sent to prison for nine years and six months, in a statement last month announcing his death.

Yevgeny Prigozhin, known by the moniker ‘Putin’s Chef,’ thanks to lucrative catering contracts he secured from the Kremlin, has admitted to being the head of Wagner. In the summer Prigozhin himself was leading recruitment drives in Russian penal colonies.

He appeared in various social media videos encouraging prisoners to join the ranks of Wagner. In exchange for a tour of duty, prisoners are granted a healthy salary and amnesty upon completion – and survival – of a six-month tour. Or they would receive a lump sum payment to their families in event of their deaths.

Last month, Prigozhin admitted to recruiting Nyirenda from a Russian jail, saying he chose to fight to “repay (Africa’s) debts” to Russia and “died a hero.”

Speaking to parliament on Friday, Zambia’s Foreign Minister Stanley Kakubo said Nyirenda was pardoned by the Russian government in August “to join a military operation in exchange for amnesty.”

The suggestion from Minister Kakubo in his statement on Friday is that the Russian government is aware and approves of Prigozhin’s recruitment of Russian prisoners in Ukraine, something the government has never commented on.

The video shows eight men in military fatigues, all clutching a candle surrounding a coffin draped in a Wagner black and red catafalque with a photo of Nyirenda and two medals on top.

The article accompanying the video says that Nyirenda “died near Bakhmut” and that he was “an attacker in the ranks of PMC Wagner.”

Bakhmut has been the scene of some of the fiercest fighting in eastern Ukraine, and a front where Wagner soldiers have been fighting.

The chapel, which is briefly seen from the outside is known as the ‘Wagner Chapel’ and is a very rare look inside a secretive location connected to Wagner.