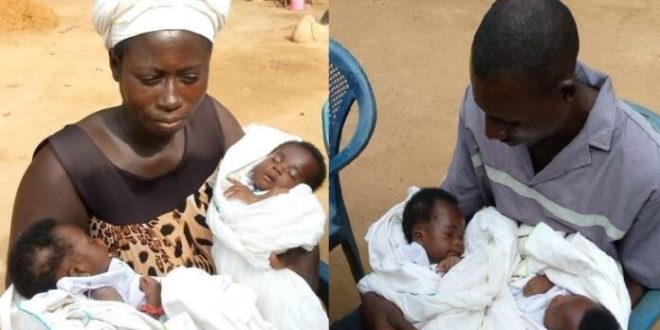 The body of Monica Mensah, a 44-year-old woman who delivered quadruplets at Ekwamase-Ogookrom a village in the Ajumako Enyan Essiam District of the Central Region, has been detained at the Cape Coast Teaching Hospital morgue over her family’s inability to settle the mortuary bill.

Her husband, Richard Asamoah who’s a farmer says he and the family are unable to check on his wife’s body at the mortuary because they owe and also fear they may be arrested by the hospital management if they visit the facility.

The family is therefore appealing to philanthropists and NGOs to support them financially to take possession of the body and lay her to rest and most importantly take car of the babies.

Monica Mensah died three days after giving birth to the female quadruplets at the Mankessim Roman Hospital after bleeding profusely for three hours.

Some residents of Ekwamase-Ogookromin in joining the appeal for support for the family told EIB Network Central Regional Correspondent, Yaw Boagyan that they contributed monies to settle the bills of the babies at the Mankessim Roman Catholic Hospital before they (babies) were released.

Ama Nkrumah, a friend of the deceased who’s currently taking care of the babies appealed for public support to enable them to cater for the babies as she’s not working.

The Assembly Member for the Area Hon. Isaac Baisei Acquah also said, because the community is deprived, it is very difficult to mobilize funds to cater for the quadruplets the reason why they need support from the public.