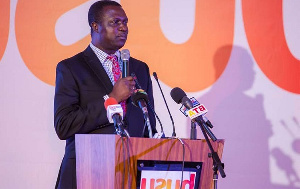 ‘Blows’ in Parliament over free SHS

Once again, Members of Parliament (MPs) had to argue on the government’s flagship programme, free Senior High School (SHS), and its implementation.

Whereas an MP from the Minority said the government did not plan well before implementing the pro-poor policy, an MP on the Majority side thought otherwise.

The House was debating on the education sector of the 2020 budget statement, and the financial policy of the government.

The MP for Upper West Akim, Derek Bekoe, in his argument, accused the Akufo-Addo government of not planning well before rolling out the free SHS, which, he said, was laudable, referring that it was a constitutional requirement.

He cited that the double-track system came with its own issues, adding that even as of now, there are no textbooks for the new curricula the government had introduced.

He further alleged that the Ghana Education Trust Fund (GETFund) has been starved by this government to the extent that it is unable to execute projects it is supposed to.

“My problem here is the government’s preparedness in implementing various policies within the educational sector. We know education in every country is something that needs to be taken very good care of. Education is an area that we don’t need toy with.

“I expect the government of the day, the Nana Addo Dankwa NPP government, to look at the way they are implementing their policies in the educational programmes. The problems that we are facing today are all because of implementation problems.

“This government, when coming into office, even in 2008 campaign, 2012, 2016, mentioned education as an area they would want to tackle, yet they come into office and refuse to plan,” he alleged.

However, the MP for Bosomtwe in the Ashanti Region, who is also a deputy Minister for Education, Dr Yaw Adutwum, could not fathom why his colleague on the other side of the political divide could make such an allegation, especially as he was not a member of Cabinet.

According to him, the Akufo-Addo led government planned for the free SHS policy, which has seen about 1.2 million students, who would have otherwise not gain access to second cycle education, enrolling freely.

He said: “Mr Speaker, the Hon Member is talking about refusing to plan – I don’t know if he is a member of the Cabinet? Where did he see that we did not plan. He’s a member of the Education Committee; you could have filed a question here asking us how we intended to do it, you never did. We have planned; we are executing.”

On the GETFund, Dr Yaw Adutwum said the MP was misleading the House with regards to the fund and infrastructure development. He further said the GETFund brought a $500 million securitisation loan, same of which was approved.

That money, he noted, had been released to the fund for infrastructure development in the various senior high schools.

“GETFund, as we speak, has enough funds to build schools and other infrastructure,” he added.