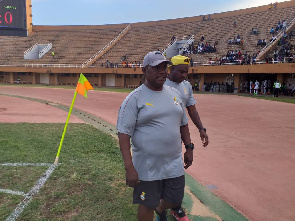 Ghana coach Jimmy Cobblah has blamed inadequate preparation for the inability of the Black Satellites to qualify for the semi-final of the ongoing U-20 Africa Cup of Nations after suffering a 0-1 loss to Mali to exit the competition as the third placed team in Group B.

Their inability to reach the semis also denied Ghana an opportunity to qualify for this year’s FIFA U-20 World Cup in Poland.

Before the tournament, Coach Cobblah said qualifying for the world Cup was his first priority, but after an explosive start with a 2-0 win against Burkina Faso, the Satellites lost to Senegal and Mali in the other group games.

After last Saturday’s loss, Cobblah said: ”We came with a team not well prepared. We learnt a lot of things to improve at later competitions.”

At the Stade Général Seyni Kountché last Saturday, it was the Malian midfielder Hadji Drame whose 53rd minute volley separated the two sides and gave the Young Eagles a semi-final date with Nigeria and a ticket to the World Cup in Poland.

Eight minutes into the second half, Mali’s El Bilal Toure, beat his marker on the run and floated the ball to Drame who volleyed it past goalkeeper Abdul Manaf Nuredeen for the winning goal that sent the Ghanaians crashing out of the tournament.

The game started on a fast note and saw both sides making goal-scoring attempts but failed to find the target in the early minutes.

Midway in the half, Mali came close to scoring but Bilal shot wide.