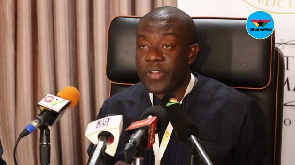 De-Eye Group according Accra-based JoyNews who publish am, dey operate for de former seat of government for like 2 years now, wey dem get connection to de ruling government.

“Watched a harrowing expose of how the Osu Castle, until 2013 the office ofthe President, now used as an Annex, has become the HQ & training camp of a private militia wing of the NPP & @NAkufoAddo. Clearly, this admin has produced enough paint to paint the whole nation black.”