An Islamic funeral ceremony was on Saturday, 9 April 2022, held at the Independence Square in Accra for the late Hajia Rahmatu Aliu Mahama, wife of former Vice-President, Aliu Mahama.

Vice-President Mahamudu Bawumia, Former President John Agyekum Kufuor, First lady, Rebecca Akufo-Addo, Wife of the Vice-President, Samira Bawumia and Minister for Interior, Ambrose Dery and other government officials were all at the Isalamic funeral ceremony to pay their final respects to Hajia Rahmatu.

The body was later airlifted to Tamale for burial.

The death of the wife of the late Vice-President was announced by her son, the Member of Parliament (MP) for Yendi, Alhaji Farouk Aliu Mahama.

“The family has lost a great pillar. Burial and funeral rites would be conducted in accordance with Islamic traditions. Further information will be provided in due course,” the MP for Yendi stated.

Hajia Rahmatu was an educationist. 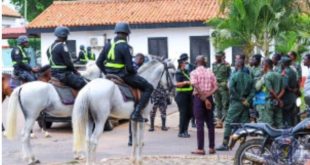