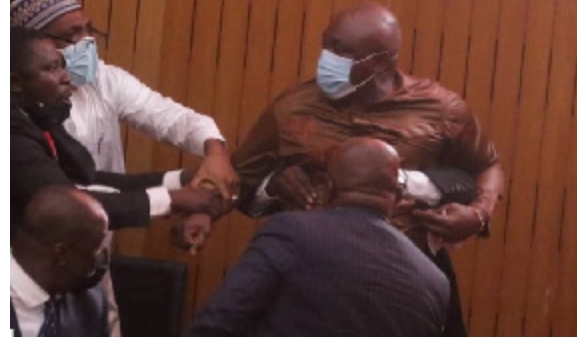 Minority vow to haul him before Privileges Committee for misconduct

One of the major events that defined the year 2021 was chaotic scenes in Parliament, the first of which was on Day One of the eighth Parliament.

Tema West Member of Parliament, Carlos Ahenkorah’s role will for ages to come, be remembered for its comic and criminal nature, but that incident will likely not be investigated aside from the many condemnations at the time.

His colleague lawmaker and Minority Chief Whip has revealed why a long-promised probe into Ahenkorah’s ballot snatching and chewing episode in the election of a new Speaker has stalled.

According to Mohammed-Mubarak Muntaka, the Minority Caucus have moved to demand a probe but Speaker Alban Bagbin has refused to admit it.

In an interview earlier this year on Hausa speaking Kumasi-based Haske FM, Muntaka submitted thus: “Bagbin is our Speaker but has refused to admit that motion. He has made an argument that as at the time that the incident happened there was no speaker, it predated him.

“We, the Minority, are also of the view that whatever happens in this land, be it in or outside of the house, Article 103 of the Constitution gives us the power to investigate, so the probe must happen, but he has yet to admit it,” he explained.

In the wee hours of January 7, 2021, the new Parliament birthed from the 2020 elections needed to elect a Speaker in order to ensure a smooth swearing-in of then President-Elect Nana Addo Dankwa Akufo-Addo.

After a rancorous process that saw Bagbin winning the vote, Ahenkorah snatched a ballot and made for the exit but he was accosted by Muntaka and marshals but he has already chewed the said ballot. It was, however, agreed that Bagbin had won the vote and he was subsequently sworn in.