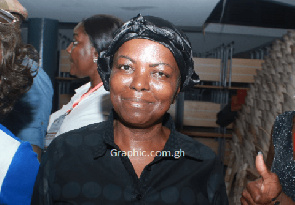 The commission investigating the Ayawaso West Wuogon by-election violence has decided to exclude the Member of Parliament for the area, Ms Lydia Seyram Alhassan from its list of witnesses.

The Executive Secretary of the commission, Mr Ernest Kofi Abotsi said the commission took the decision because it was speaking to people who had primary evidence.

“It turned out that the candidate who actually won was not on the scene. She was not here; she never was here for the entire time.”

“Everything she heard about this incident she heard from someone. She only at best is secondary witness. The commission, therefore, came to the conclusion that apart from winning the election, there was nothing she could tell us.”

“She would be speaking on the basis of what people have told her. That’s why we decided that she should not come” Mr Abotsi said on the sidelines of the commission’s visit to the centre of the action during the violence on Friday.

It was a fact-finding mission meant to apprise and furnish the commission with corroborative evidence or otherwise relative to the testimonies given before it.

The visit took them to the La-Bawaleshie Presbyterian Basic School, sites of bullet holes near the NDC candidate Mr Delali Brempong’s House, inside the house as well as a hairdressing saloon which is about 100 metres away from the house which also had two bullet holes.

Among the findings were 19 bullet holes at different spots.

Ms Lydia Alhassan was initially billed to give her testimony on February 25, 2019.

Although she came to the commission on that day, she did not testify.

To that, Mr Abotsi said the commission “takes witnesses based on relevance.”

“The commission’s assessment of witnesses is geared towards whether their testimony is going to be relevant. It turned out that even though initially we had wanted to speak to all the candidates, the commission’s subsequent assessment was that it should speak to people who had primary evidence because the commission does not have a lot of time,” he said.

The commission began sitting on February 11, 2019, three days after Vice President Alhaji Dr Mahamudu Bawumia, inaugurated it with terms of reference including, making a full, faithful and impartial inquiry into the circumstances of, and establish the facts leading to, the events and associated violence during the Ayawaso West Wuogon by-election on January 31, 2019.

The commission has a month to submit its report to the President giving reasons for its findings and recommendations, including appropriate sanctions if any.

With that in mind, Mr Abotsi said although the commission was working against speed and time, it was also important that the conclusions were thorough and the recommendations made useful and effective.

He said the commission hoped to meet its deadline while working on the tight schedule.

Meanwhile, the Inspector General of Police, Mr David Asante-Appeatu, the Coalition of Domestic Election Observers and the Centre for Democratic Development are billed to appear before the commission on Monday March 4, 2019.