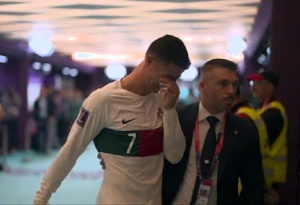 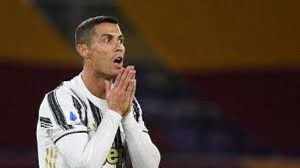 With Portugal one of the favourites to lift the trophy in Qatar, Ronaldo hoped to add the only major title missing from his stupendously stocked honours cabinet.

And at 37, the former Manchester United striker knew Qatar 2022 was his last chance at becoming a world champion.

But it ended in disappointment for Ronaldo and all of Portugal as Morocco pulled off a stunning 1-0 win to reach the semifinals of the World Cup for the first time in history.

Ronaldo played the second half of that encounter but could not inspire the Selecao to come back from falling behind to a Youssef En-Nesyri header in the 42nd minute.

And the former Real Madrid hero was caught leaving the stadium in tears following Portugal’s defeat.

It was a sorry sight that reminded many of Liverpool legend, Luiz Suarez, who also cried profusely when Uruguay crashed out of the World Cup in the group stage.

Okocha, who never won CAF’s Africa Best Player award despite his prodigious talent, also knows a thing or two about missing out on titles after coming so close.

And the former Paris Saint-Germain star has charged a sorrowful Ronaldo to accept his world cup miss as his fate and wipe the tears away.

“Oh yes! We’ve seen it in this tournament. A lot of stars have cried because they knew this could be their last chance of playing in the World Cup,” Okocha said.

“We saw Suarez and now Ronaldo. What a fantastic career he has had. He’s an icon but I mean, some things are not meant to be.

“I don’t think that it was meant for him to win the World Cup because they had everything. But credit to Morocco.”

Cristiano Ronaldo will be 41 years old when the next edition of the World Cup kicks off in another four years.