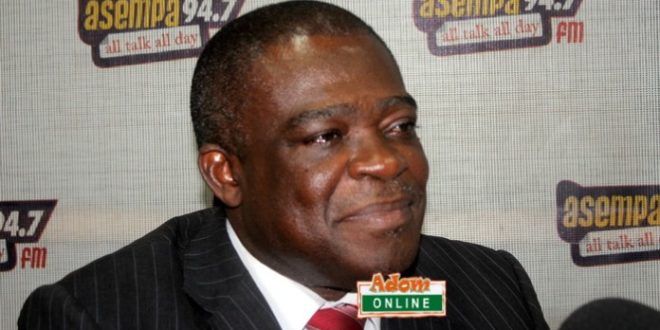 Audio: I will lead a boycott of 2020 elections if… Opuni-Frimpong warns

Former General Secretary of the Christian Council of Ghana is threatening to lead a boycott of the 2020 general election if vigilante groups are not banned.

Rev. Dr. Kwabena Opuni-Frimpong feared Ghana will be plunged into chaos if such groups affiliated to the ruling New Patriotic Party (NPP) and the opposition National Democratic Congress (NDC) are not disband.

His comment follows the violence in the Ayawaso West Wuogon by-elections which led to about 17 sustaining gunshot wounds and a Member of Parliament for Ningo-Prampram, Sam George assaulted.

The task force, masked and heavily armed, stormed a polling station at La Bawalashie and shot at persons engaged in the electoral process.

It is not yet known what may have prompted the armed security personnel to shoot and injure at least six persons, but police have launched a full-scale investigation.

But the Minister of State in-charge-of National Security, Bryan Acheampong, has explained that the masked men are National Security Operatives. His comment has generated a lot of controversy with the opposition National Democratic Congress (NDC) calling for a full-scale investigation.

Speaking on Asempa FM’s Ekosii Sen programme Friday, Rev. Opuni-Frimpong expressed disappointment in the government for allowing such hoodlums to engage in illegality.

He revealed that, these same masked men were deployed to the funeral of late MP, Emmanuel Kyerematen Agyarko and brandished guns in the full glare of the public.

He blamed the NDC and NPP for giving legitimacy to such hoodlums to perpetrate violence during elections.

“Both President Akufo-Addo and former President John Mahama are beneficiaries of the action of such group but ahead of 2020 elections, they must allow Ghana’s democracy to work” he bemoaned.

Rev. Opuni-Frimpong threatened he will initiate #OPERATIONSTAYINDOORS during the elections if such groups are allowed to operate till 2020.