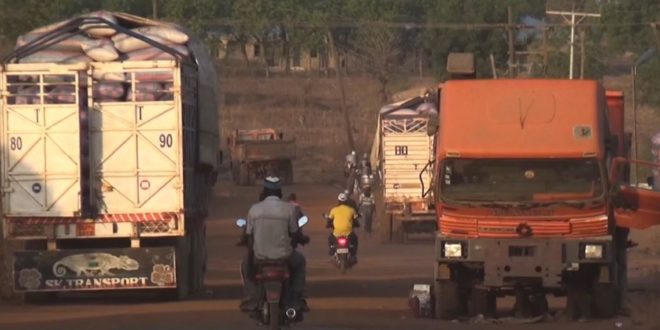 Some residents of Chereponi in the North East Region are protesting the poor state of roads and dilapidated schools in the district.

The lack of motorable roads in the area has forced many farmers to illegally export soya beans and other grain-related products to neighbouring countries.

According to a spokesperson for the Anufor Students, Latif Alhassan, it is difficult for the pupils to learn in school blocks that have had their roofs ripped off by rainstorms.

He added that there are instances teachers refuse postings to the community and surrounding areas due to the bad state of the roads, among other security concerns.

“For some of the schools, before you even get to the street, you will cross a river. It’s a road but the way the rain has damaged it, you can’t cross, and when it rains, nobody can cross to those schools. They are within the Chereponi township and not in villages – you can’t even move from one house to another. They are all part of the challenges we are facing here.

“We have been raising them to the various stakeholders, trying our best to get solutions. If you look around all the four corners of Chereponi, we don’t have good roads. We have students in Chereponi who go to school in other districts and various communities but even the road from Chereponi to Yendi is not safe for children – armed robbers can attack them. Just yesterday, there was an attack on the road,” he told JoyNews.

Meanwhile, the Member of Parliament for Chereponi, Tahidu Abdul-Razak, says he has filed an urgent question on the floor of Parliament to get the Roads and Highways Minister to provide a response to why the Yendi-Chereponi road has been abandoned.

“Fixing of the road is very paramount because without the road, we can’t have access to most of our needs. This is a farming season where farmers need to have access to their farms. Notwithstanding that, I have made moves to the Ministry and Presidency over the road issues.

“I have filed a question and it’s admitted; so, on Friday, I am going to ask the Minister of Roads reasons the contractors left site since December [2020] and in July last year,” he noted.