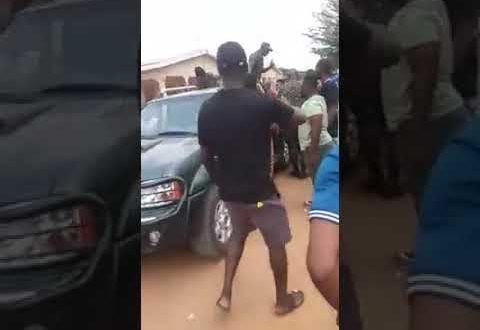 Attack on our officers by Nigerians won’t go unanswered – GIS

The Ghana Immigration Service (GIS) has set up a committee to probe an attack on some of its men by some Nigerian nationals at Budumburam at Kasoa.

Some Nigerians in a video which has since gone viral are seen preventing officers of the Immigration Service on duty to check on the resident permits of the foreigners.

The Nigerians are seen blocking the vehicle the officers are driving in with pieces of cement blocks and wooden objects to prevent the officers from leaving the scene.

The officers looked on helplessly as they could not move their vehicle from the scene as a result of the blockage.

The head of public affairs at the Ghana immigration service, Superintendent Michael Amoako Atta reacting to the incident told Starr News a committee has been set up to probe the matter.

He said  the service will not  “sit ideal for this to go unanswered.”

Previous Akufo-Addo settles on Goaso as capital for Ahafo region
Next We can’t engage in visa war with U.S. – Ayorkor Botchwey