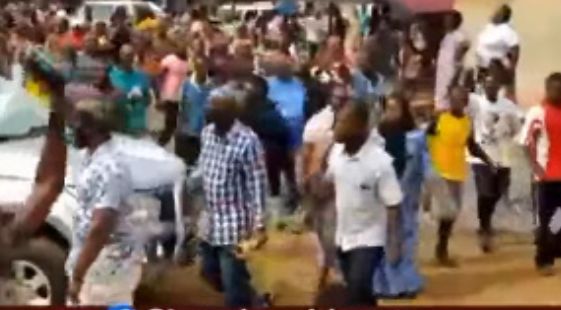 Atta Akyea chased out of town by angry residents

Atta Akyea whisked away in a car

Some angry residents of an unidentified town in the Akim Abuakwa South area have chased out their Member of Parliament, Samuel Atta Akyea.

In a video shared on Facebook, the MP is seen taking steps towards a pick-up vehicle, as scores of people hooted and booed at him, sending him away from the area.

The MP eventually entered the vehicle, surrounded by people believed to be his close executives, and his security details, and then was whisked away.

The caption of the video, sourced to Ghanaian Citizen TV on Facebook but shared by Benjamin Wayo Mahama, said that the action was undertaken by the angry residents because of failed promises.

“NPP MP Hon. Samuel Atta Akyea chased out of town over failed promises by constituents. He is the MP for Akim Abuakwa South in Eastern Region. Nana Addo is the former MP of that constituency. He is also the Former Minister of Works and Housing,” the caption read.

Other portions of the video showed a road that was in a very bad state, with the voice commentary under the video, describing the nature of the road.

See the video below: