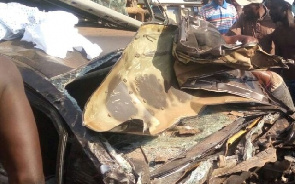 Five mourners are reported dead while over 40 have been hospitalised after an accident at Asuokwao near Asamankese, on the Adeiso-Nsawam road in the Eastern Region.

Confirming the accident on Thursday, 21 February 2019, to Valentina Ofori-Afriyie on Class91.3FM’s 505 news programme, Administrator at the Asamankese Hospital, Mr Clement Marfo said: “I can confirm a minimum of five [deaths]”.

Mr Marfo explained that the mourners came to the hospital to convey a corpse to Asuokwaw for a funeral service and burial in the afternoon. However, the mourners who were onboard a KIA Rhino truck were involved in an accident at Asuokwaw several kilometres away from their destination. The lifeless bodies of the individuals who died on the spot and scores of others who sustained various degrees of injuries were rushed to the Asamankese Hospital.

Mr Marfo said they have subsequently called all the medical doctors and nurses at the health facility to attend to the emergency cases as he described the development as “terrible”.

He said the police and personnel from the Ghana National Fire Service (GNFS) were dispatched to the accident scene and some chiefs who heard about the accident have visited the hospital.