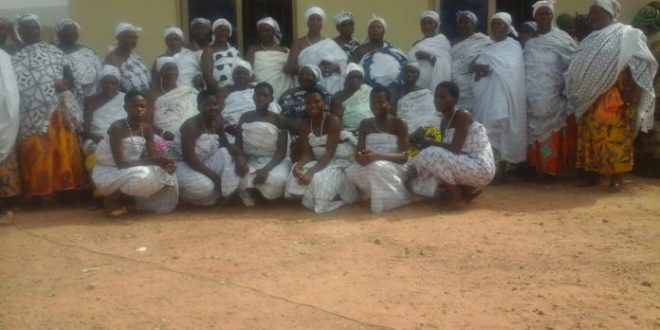 Queen mothers in the Ashanti region are considering reintroducing puberty rites (Bragoro) an African traditional ceremony to initiate girls into womanhood, in an open environment to curb the high rate of teenage pregnancies in the region.

Addressing participants at a three-day traditional festival which saw six Girls initiated into Puberty Rites at a grand durbar held at Kodie over the weekend, the President of Queenmothers Association in the Afigya Kwabre North and South Districts, Nana Ama Agyemang explained the Akan tradition in the past demanded any young virgin of her first menstrual flow be presented to the queenmother for a special rite to be performed beforeshe was given out into marriage.

The festival themed, “Re-introduction of Bragoro (Puberty Rites)” was aimed at controlling the menace of teenage pregnancy and promiscuity among the youth particularly, the girl child with the re-introduction of the long forgotten traditional rites.

‘As Asantes, we have our own traditions and customs so far as teenage pregnancy is concerned, but modernity has taken it way giving room for teenage pregnancy to be accepted in our kingdom. This year, our number one priority is to bring back the practice of puberty rite. That is our culture and its defines who we are as Asantes,’ she explained.

Nana Ama Agyemang who is also the Queenmother of Kodie added that the practice in the olden days prevented young girls from premarital sex affairs.

“We as Queen mothers really understand the initiation of puberty rites and those who went through the rites will tell you how useful the practice has been to them. Even though, there was existence of early girl child marriage in the olden days, yet girls still had patience to go through puberty rite before they get pregnant. Knowing very well they could be cast out from their communities if they get pregnant without going through the initiation,’ she said.

“I know human rights advocates will raise serious concerns about it but I will not blame them because they are ignorant of our culture therefore I expect them to keep mute,” she warned.

Puberty rite is observed when young women who have had their first menstruation are confined and given some lessons in sex education, HIV-AIDs and birth control.

After the initiation of the girls into adulthood, a durbar is held in their honour.

She pointed out the sustainability of the exercise noting, it would be held annually as the Queenmothers have drawn up plans to visit various basic schools periodically to educate the girls on the importance and benefits of remaining virgin.

“As custodians of tradition and culture, it’s our responsibility to curb the upsurge of immorality among the teenage girls and I call on all indigenes within the two districts and in the diaspora to support us in cash and in kind for the success of this noble tradition which is our way of affecting the society positively,” she averred.

Previous Back your words with actions – NUGS to government
Next International labour leader, Kwasi Adu Amankwah detained in Zimbabwe