Home / GENERAL NEWS / Ashaiman donation brouhaha: The facts according to Police and Barker-Vormawor 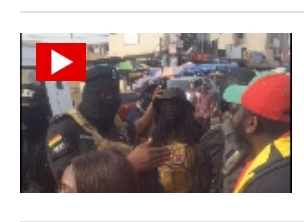 Ashaiman donation brouhaha: The facts according to Police and Barker-Vormawor

#FixTheCountry campaigner, Oliver Mawuse Barker-Vormawor was at the Ashaiman Police Station on Sunday, March 20, 2022, together with members of the group, to make a donation of food items to his former cell mates.

The Cambridge University researcher had been in Police custody since February over coup threats made via a Facebook post. Within the five weeks that he was in detention, his home was the Ashaiman Police Station.

According to him, seeing the bad conditions especially relative to feeding in the cells was partly responsible for his decision to go on two hunger strikes (in detention) and as a ‘freed’ man, to donate food items to his former mates.

#FixTheCountry in a press statement stated that they had been barred from undertaking the donation and alleged among others that a donation they had made earlier was returned by officers.

The Ghana Police Service issued a statement late Sunday to clarify in part and debunk in other parts what exactly happened.

GhanaWeb picks the major narratives as presented by both sides

#FixTheCountry’s claim: We have just been informed by the Police hierarchy that the Ashaiman Police Station has been instructed not to accept the donations to Oliver Barker-Vormawor’s former cell mates.

Police response: The Command (Tema Regional) wishes to state that we got to know from some media platforms that Mr Oliver Barker-Vormawor, recently out on bail on a charge of treason felony, intended to make a donation of some food items at the Police Station.

He was informed through his lawyers that the intended donation was against Police Standard Operating Procedure (SoP) on the feeding of persons in Police custody and he should therefore refrain from such action.

#FixTheCountry’s claim: As we understand, the Officers have been informed that if we persist with the donation, the Police are under instructions to say that there is no senior officer to receive the items.

Police response: In spite of the notice given him, he showed up at the Police Station in the company of some individuals and a musical band with the obvious intention still of making the donation and creating unnecessary drama.

Police therefore had no choice but to refuse him the opportunity. After loitering at the station for a while amidst noisemaking and inconveniencing other persons at the station, he and his group finally dispersed.

#FixTheCountry’s claim: We already delivered 40 bags of water to the Police before the information came through. We have been called to come back for the water.

Police response: The claims by Mr Vormawor that he donated food at the station but was later called to come back for them as a result of an order from above is false and should be disregarded.

The #FixTheCountry’s release said they persisted in wanting to donate the items accusing Police of failing to shed its partisan instinct, “to ensure that donations which are intended for persons who are vulnerable, are catered for, and the complete disregard Police have for the detained to the point of rejecting donations that are meant for the detainees who desperately need it.

The Police statement also explained the procedures and processes under which food items are accepted for inmates in their custody.

It also emphasized that feeding the inmates was principally the role of the state. “We wish to state that feeding of persons in Police custody us the responsibility of the government and it is a responsibility that is discharged according to law and laid down procedures.

Find both statements below: