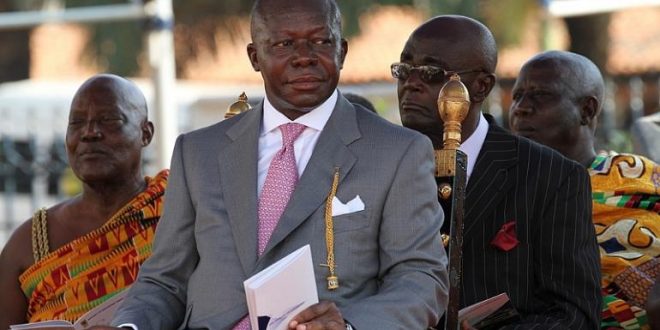 The Asantehene, Otumfuo Osei Tutu II, has urged Ghanaian women to gather courage and prepare themselves well to assume leadership positions in their various fields of endeavour.

He said women had a critical role to play in the country’s development agenda and it was important for them to position themselves to assume higher levels of responsibility in nation-building.

Otumfuo Osei Tutu made the call when Mrs Bridget Dzogbenuku, flag-bearer of the Progressive Peoples Party (PPP), led a delegation of the party leadership to pay a courtesy call on him, at the Manhyia Palace.

The call was to introduce herself to the occupant of the golden stool and seek his blessings and guidance as she begins a two-day campaign tour of the Ashanti region.

Otumfuo Osei Tutu praised Mrs Dzogbenuku for taking such a bold decision and urged young females to follow in her footsteps and work to aspire for higher leadership positions wherever they found themselves.

He also charged the leadership of the PPP to work hard to deliver on its campaign promises should the party win the December 2020 elections.

Mrs Dzogbenuku, on her part, said the PPP was a peaceful party which stood for truth and integrity in all its dealings with the electorates.

“We come in peace and truth. It’s time for the people of Ghana to accept that females can also work hard to develop the nation”, she added.

Mrs Dzogbenuku said PPP was formidable in the Ashanti region and with the blessings granted by Otumfuo Osei Tutu, the party would make great inroads in the region to claim the presidential seat in December 07.

She encouraged all women in Ghana to take courage, self-esteem, and enter the leadership roles and responsibilities of the country.