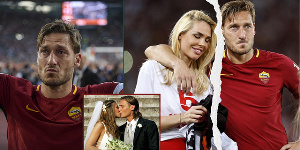 Serie A icon, Francesco Totti has opened up on alleged cheating by his wife, Ilary Blasi that led to their split.

The AS Roma legend disclosed that he has been through traumatic experiences since finding out last year that Ilary has been cheating on him.

Speaking with Corrirre della Sera, Totti claimed he was neglected by Ilary during his lowest moment when he retired from football and lost his father a few years after.

‘I have lived through a difficult period, first because I stopped playing and then my father died due to Covid,’ Totti told Corriere della Sera, as quoted by Marca.

‘I also had a strong Covid (illness) for 15 days. However, my wife, when I needed her most, was not there.’

Totti said he had decided not to speak on what led to the slip in July 2022, but has to set the records straight after reading supposed failed claims about him.

‘It is not true that I was the first to betray. I said I was not going to speak and I did not, but I have read too many hoaxes in recent weeks. Some have even made my children suffer,’ he continued.

‘In September of last year, the rumours began to reach me: “look, Ilary has another one. Indeed, more than one.”

‘I had never done it in twenty years, nor had she ever done it with me. But when I received warnings from different people, whom I trust, I began to suspect.

‘I looked at her cell phone and I saw that there was a third person, who acted as an intermediary between Ilary and another.’

He said finding out about his wife’s infidelity made him depressed.

‘Here was the evidence (of the affair). The facts. And that led me to depression. I could no longer pretend that nothing was happening, but it wasn’t me anymore, it was someone else. I got out thanks to Noemi,’ he added.

Francesco Totti and Ilary Blasi, a former TV presenter tied the knot in 2005 and have had three children over the period.

According to Corriere della Sera, the couple might end up in court, where Blasi intend to her side of the story.