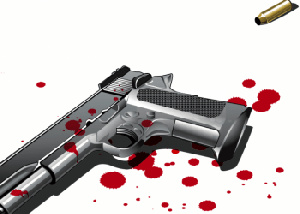 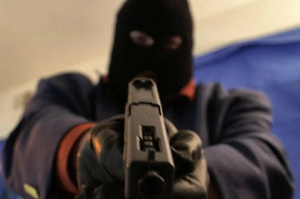 Three armed robbers who stole a Kia Morning taxi cab from the owner engaged Police officers at Awutu Bereku in the Central Region in a gun battle after Police accosted them.

Police officers had information that the armed robbers had attacked and stolen the car with Registration number GR 6013-21 from the driver at Abokobi and were heading toward Winneba.

Armed with this information, a team of Police officers mounted a Barrier at Awutu Bereku Township on the Kasoa – Winneba Highway to arrest the criminals.

Eyewitnesses say when the police stopped the car for interrogations, the robbers opened fire on them nearly killing one policeman, and sped off.

The five police officers then got a Taxi and a motorbike and gave the armed robbers a hot chase resulting in a gun battle between the two groups.

The suspects parked the car after reaching a section of the road and run into a nearby bush for cover. Blood was seen in the car after Police officers returned fire.

This Police are calling on hospitals and other health facilities in the area to report any person with gun wounds who turns up for treatment.