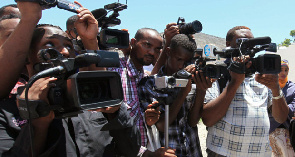 The two journalists – Martin Kwame Henyo, Eastern Regional correspondent of TV Africa and Frank Oteng Bruno, Cameraman for Ghone TV Eastern Regional Correspondent – were in Akyem Apampatia Community to cover the scourge of abandoned mining pits which have become perilous to residents and also open defecation menace in the community particularly the school which has been turned into place of convenience due to lack of toilet facility.

However, they were initially put under unlawful arrest by some young men who allegedly held them hostage for 2 hours in a house before releasing to armed security men believed to be providing security for Xtra gold mining company.

The guns and knives wielding men allegedly took the Journalists to the mining site of the company where they were manhandled and coerced to delete all visuals taken from the abandoned mining sites on their camera.

The timely arrival of the Police Team from Akyem Kwabeng helped to rescue them from the thugs of the mining firm.

They were escorted by the Police to Anyinam to board vehicle to Koforidua.

Last week, Starr News published that the Chief of Akyem Apampatia community Barima Owusu Akyem Boahene and his elders passed a vote of no confidence on the Unit Committee Member, Geoson Owusu Okyere.

They accused him of insubordination and unjustifiable criticism of the Chief.

However, the Unit committee member denied the allegation adding that he has only been demanding accountability from the Chief whom he accused of misappropriating monies paid to him by mining companies including Xtra gold operating in the area while the community grapples with open defecation, inadequate water supply among other basic social amenities.

He has also been piling pressure for reclamation of abandoned mining pits posing danger to both young and adults.