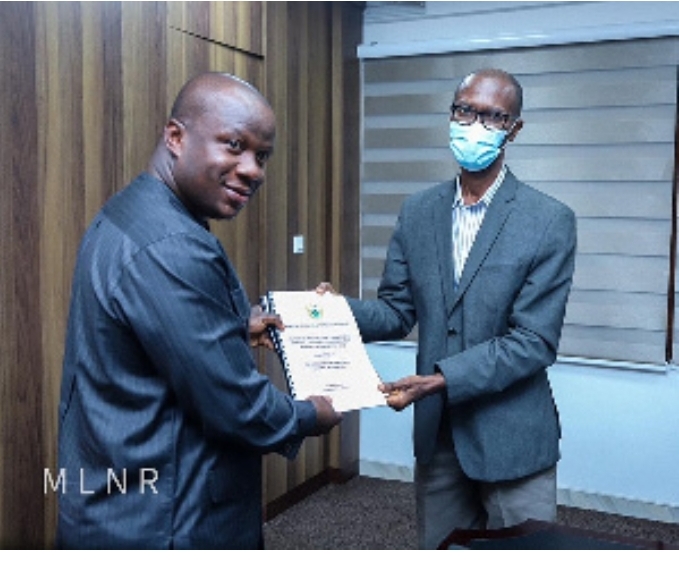 The Minister for Lands and Natural Resources, Samuel A. Jinapor, on Tuesday, 1st February 2022, received the report from the committee set up to probe the circumstances that led to the explosion at Apiate in the Western Region.

The presentation of the report follows an earlier preliminary report presented by the Minerals Commission, the regulator of the mining sector.

Presenting the Report, the Chairman of the Committee, Mr. Benjamin Aryee, a highly respected former Chief Executive Officer of the Minerals Commission, said, following the incident, which claimed some thirteen (13) lives and rendered several people homeless, the Minerals Commission carried out its investigations, in accordance with the Minerals and Mining (Explosives) Regulations, 2012 (L.I. 2177), and submitted a preliminary report to the Minister for Lands and Natural Resources.

He added that given the complexity of the matter, the Minister set up a three-member committee to carry out independent investigations to corroborate or otherwise the report of the Minerals Commission.

According to Mr. Aryee, the Committee visited the Appiatse community and had interviews with the chiefs and people of the community including eyewitnesses.

The Committee also interviewed those who were involved in the incident including the truck driver, the police escort, the driver of the escort vehicle, among others. Also interviewed were officials of the companies involved in the transportation, including Maxam Ghana Limited, where the explosives were being transported from. Additionally, the Committee inspected and reviewed the log books of Maxam and the various police stations.

Mr. Aryee thanked the Minister for the opportunity to serve and said he believes that, with the information gathered by the Committee, and the documents reviewed, the Report fairly represents the facts leading to the incident. He said the Committee, based on those facts, has made some recommendations for the consideration of the Minister.

Receiving the Report, the Minister thanked the members of the Committee for the effort they put in to get the Report ready within a short period.

He said he will review the Report as soon as possible, and implement the necessary recommendations, once satisfied. The Minister noted that the Terms of Reference of the Committee was limited to compliance with mining regulations.

Mr. Jinapor also said in addition to rebuilding the community, the President of the Republic, H.E. Nana Addo Dankwa Akufo-Addo, is committed to ensuring that anyone found culpable is made to face the full rigours of the law. He assured that Government, through the Ministry of Lands and Natural Resources, will take immediate action on the Report.

The other members of the Committee were Mr. Peter Awuah, the Technical Director on Mines at the Ministry of Lands and Natural Resources, and Mr. Cletus Alengah, a Lawyer and Special Assistant to the Minister.