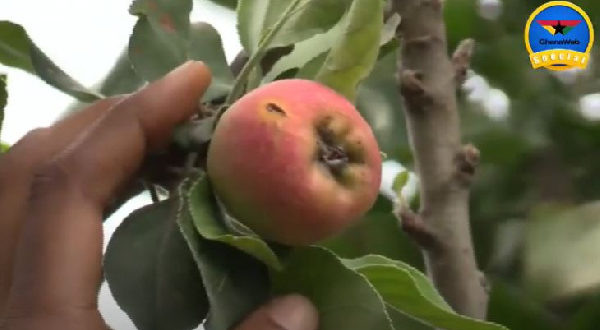 Another ‘apple’ tree discovered in Teiman-Abokobi

Last week, news went viral that an apple tree had been sighted in Wiamoase in the Ashanti Region. The news was monumental because for so long the notion was that apple fruits could not survive in Ghana due to the climate and soil composition.

The excitement which greeted the Wiamoase apple discovery was however shortlived when it was discovered that it was rather a fig tree after horticulturalists took samples to the laboratory for testing.

But Yaw Antwi Boadu says the fact that the Wiamoase discovery turned out to be a hoax is not an affirmation that apple trees and fruits cannot survive in Ghana.

Yaw Boadu who has planted varieties of crops including an apple tree in his garden noted that this paradise apple tree he’s planted for almost three years should be ready for consumption by next month.

He told the news team that toured his fruit garden that “I think anything is possible once you set your mind to it…with this prove it shows that it is possible and can be done”.

Revealing his secret on how this ‘wonder’ apple tree is still surviving despite the preconceived ideas Ghanaians have on planting apples, he indicated that Ghana’s very own loamy soil coupled with animal droppings as manure for his plant is doing the magic for him.

Mr Boadu also admitted that all has not been rosy since he decided to start farming at home as part of his hobby.

Narrating his ordeal to the news team who toured his farm Thursday, May 21, 2020 he professed that, the first batch of seedlings he planted died due to pest attack and not enough manure to sustain it.

He told GhanaWeb that “I started in 2017, I brought the first set of seedlings into the country, I planted, they all died. The manure that I put in the hole had not decomposed enough then so they all died. Then I brought another set, those set survived. Two of them started fruiting but they also died. I’m sure some pests of insects attacked them but this is the only one that is left now and this is the first fruit on it”.

“I do it for fun. I have an app to just identify fruits or plants that I have…we can take a picture of the leaf or fruit and it will show you what it is. So that will give you that confidence…”

Mr Boadu is yet to contact experts to get his apple tree tested and affirmed.